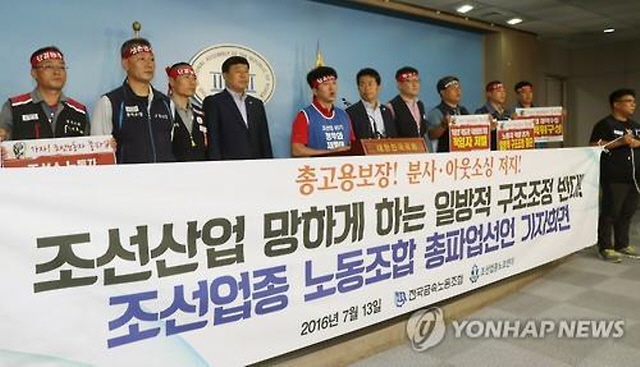 Representatives of workers from major shipyards hold a press conference in Seoul on July 13, 2016. (image: Yonhap)

An estimated 30,000 workers may join the walkout, the sources said.

South Korean shipbuilders have been under severe financial strain since the 2008 global economic crisis that sent new orders tumbling amid a glut of vessels and tougher competition from Chinese rivals.

The country’s top three shipyards suffered a combined operating loss of 8.5 trillion won (US$7.4 billion) last year due largely to increased costs stemming from a delay in the construction of offshore facilities and an industry-wide slump, with Daewoo Shipbuilding alone posting a 5.5 trillion won loss.

The shipbuilders have recently drawn up sweeping self-rescue programs worth 10.35 trillion won in a desperate bid to overcome a protracted slump and mounting losses.

Meanwhile, workers at Hyundai Motor Co., the country’s top automaker, are set to go on a partial strike on Tuesday, Wednesday, Thursday and Friday, demanding a pay raise and better working conditions.

The country’s business circle urged the labor sector to scrap the planned strike as their moves are politically motivated. “On the surface, they claim that their strike is a result of the failure of wage negotiations, but their moves are aimed at nullifying government policies and restructuring moves,” said the Korea Employers Federation.

In regards to the joint strike by workers at shipyards, the federation claimed their salaries are higher than in other segments, and their planned walkout can not be justified.