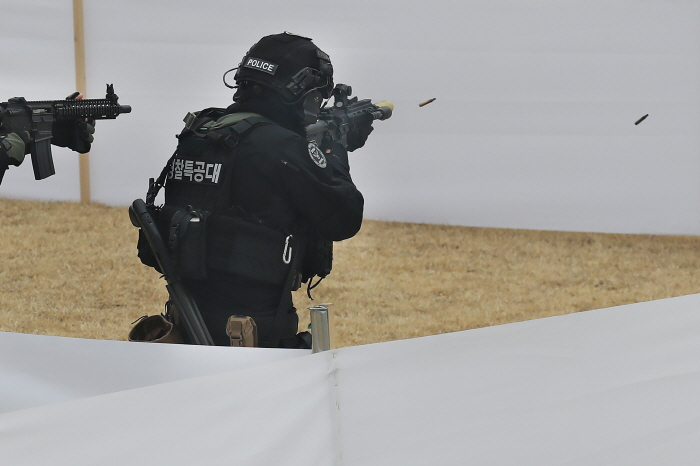 Until now, the KNPA has been conducting shooting drills twice a year for inspectors or lower ranking officers. (Yonhap)

SEOUL, Apr. 18 (Korea Bizwire) — The Korean National Police Agency (KNPA) will begin a policy of mandatory shooting practice for superintendents and senior superintendents as part of its initiative to increase policing capability at crime scenes.

“The shooting drills, previously conducted for inspectors or those in the lower ranks, will now be expanded to include chief and senior superintendents,” said the KNPA.

“It is now mandatory for them to participate in the exercise at least once a year.”

Until now, the KNPA has been conducting shooting drills twice a year for senior inspectors or lower ranking officers.

Due to rising concerns, however, that exempting senior superintendents from the shooting practice not only goes against the mission statement of the agency, but also reduces the capability of officers to carry out their duties at crime scenes, the KNPA decided to include them in the mandatory drills.

“We decided to include chief and senior superintendents in the shooting drills once a year,” said the KNPA. “However, the exercise results will not be reflected in their performance reports.”