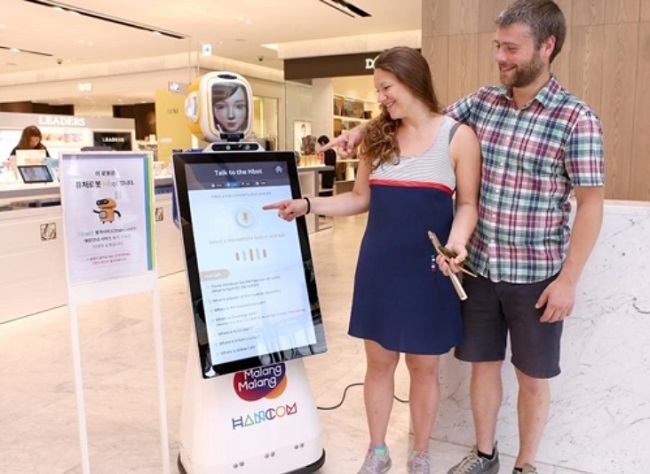 The new ‘shopping bot’, which is the first in the distribution industry, has the exterior appearance of a typical robot, but is equipped with a large touchscreen tablet on the front. (Image:Hancom)

SEOUL, Aug. 7 (Korea Bizwire) — Foreign tourists will no long have to fear the language barrier in South Korea – at least in some departments stores. Robots offering translation services are expected to resolve some of the inconvenience associated with communicating in Korean for foreign tourists.

Hancom, an IT software company said on August 6 that it has begun to provide Hyundai Department Stores with AI-based robots to assist foreign shoppers with translation.

The new ‘shopping bot’, which is the first in the distribution industry, has the exterior appearance of a typical robot, but is equipped with a large touchscreen tablet on the front. Installed with Korean-based voice recognition translation software from Hancom, the bot provides translation service to foreign shoppers.

Located in the vicinity of information desks and capable of deciphering speech from non-Korean tourists, the robots translate these languages into Korean and other languages.

The shopping bots feature AI-based NMT (Neural Machine Translation) technology, which helps recognize context and word arrangement in sentences, enabling them to offer translation service of a high accuracy. Moreover, based on big data, the more the bots translate, the better their translation will become, explained Hancom.

The languages currently in service are Korean, English, Chinese, and Japanese with French, German, Russian and Arabic projected to be included in the near future.

Hyundai Department Store Group, as a means to relieve foreign customers of language barrier problems, has placed the new shopping bots at its Hyundai City Outlet at Dongdaemun, which is popular among foreign tourists, and the company is planning to extend the service to its other stores in the future.