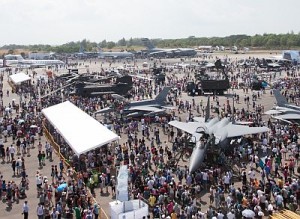 Singapore, Feb 16, 2014 (Korea Bizwire) – Singapore Airshow 2014 attracted close to 100,000 visitors over the public day weekend on 15 and 16 February. In addition to the 80,000 public day tickets that were completely sold out, the Airshow also welcomed guests for the Republic of Singapore Air Force’s 45th anniversary celebrations at Singapore Airshow, exhibiting personnel, student groups and concession ticket holders over the two days.

Visitors to the Airshow were treated to an impressive line-up of public day activities, including the highly-anticipated flying display, featuring the largest number of aerobatic teams in the history of Singapore Airshow. The line-up included awe-inspiring team aerobatics performances by the Republic of Singapore Air Force (RSAF) Black Knights, the Republic of Korea Air Force (ROKAF) Black Eagles and the Indonesian Air Force (TNI-AU) The Jupiters. There were also solo aerobatic performances by the U.S. Air Force, the U.S. Marine Corps and the Royal Australian Air Force (RAAF). The RSAF pavilion, part of the RSAF’s efforts to celebrate its 45th anniversary with the public at Singapore Airshow 2014, was also a major highlight of the public days.

The new public day arrangements introduced this year by show organisers, where visitors go through security clearance at Singapore Expo before boarding the shuttle bus to Changi Exhibition Centre, were well-received. In particular, the objective of getting visitors into the show swiftly and safely during the peak period in the morning before the flying display was achieved.

“We are delighted with the achievements of Singapore Airshow 2014. We received good feedback from our public day visitors who enjoyed the impressive line-up of activities, especially the stunning aerial display performances, and found it convenient to access and leave the show.   We will look into how we can improve on this further for the next show in 2016. We would like to thank all our partners and agencies for their support in making this another successful Airshow,” said Jimmy Lau, Managing Director of Experia Events, organiser of Singapore Airshow.

Singapore Airshow returns from 16 to 21 February 2016 at Changi Exhibition Centre.

Experia Events specialises in organising and managing exhibitions and conferences of strategic interest, fostering industry development and thought leadership. It has built a strong portfolio in aerospace and defence with the highly successful Singapore Airshow, Asia’s largest and one of the most important aerospace and defence exhibitions in the world, and IMDEX Asia, the leading international maritime defence exhibition in Asia.  Its expertise also extends to the government and lifestyle sector, through key events such as the inaugural ScreenSingapore, the Singapore International Water Week and World Cities Summit. With a sound track record underscoring its aspirations to stage events that influence, Experia Events aims to diversify its range of strategic events globally. For more information, visit: www.experiaevents.com.