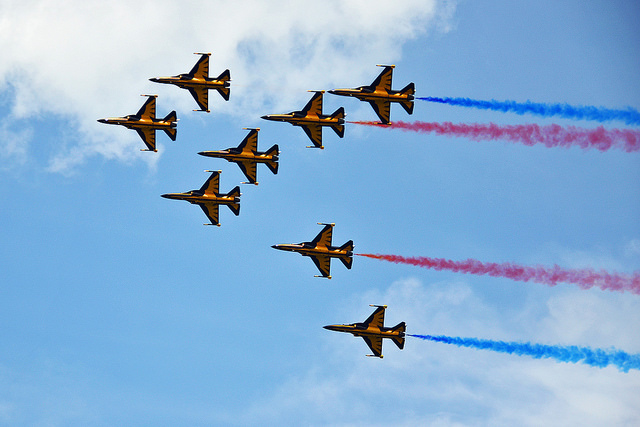 The results of the study demonstrate Singapore Airshow’s critical role in the ecosystem of Singapore’s aerospace and defense industry, contributing to the long-term sustainability of the industry and opening doors to key markets for local and global companies alike. (image: Choo Yut Shing/flickr)

SINGAPORE, Sept. 4 (Korea Bizwire) — Singapore Airshow, Asia’s largest and one of the most important aerospace and defense exhibitions in the world, contributed S$319 million to the Singapore economy in 2014, according to a recent study by Kadence International. This represented a 25 per cent increase from the 2012 edition. The event, held from 11 to 16 February 2014 at Changi Exhibition Centre, attracted more than 146,000 visitors from 125 countries/regions.

The growth in Singapore Airshow’s total contribution to the Singapore economy was supported by a substantial increase in foreign expenditure, which rose 30 per cent from 2012. In 2014, S$284.9 million was accrued from spending by foreign visitors on travel and accommodation, event and exhibition space, as well as other personal expenditure such as food & beverage, leisure, shopping and transport.

The study also highlighted an increase in personal spend per day by exhibitors, trade visitors and public visitors to the show. The largest increase was among exhibitors, who spent an average of S$491 per day in 2014, a 30.9 per cent increase from 2012.

Playing a critical role in the aerospace and defense industry ecosystem

Participants found the show valuable for networking, targeting partners and business opportunities and strengthening customer relationships. As a testament to the value the show brings to them, more than 75 per cent of exhibitors have already confirmed their plans to participate in the 2016 event.

The results of the study demonstrate Singapore Airshow’s critical role in the ecosystem of Singapore’s aerospace and defense industry, contributing to the long-term sustainability of the industry and opening doors to key markets for local and global companies alike.

“Singapore Airshow has fast established itself as Asia’s largest and most important aerospace and defense exhibition. This year, we witnessed record exhibitor numbers, strong industry participation, and strategic partnerships forged during the Airshow,” said Mr Lim Kok Kiang, Assistant Managing Director of the Singapore Economic Development Board (EDB). “There were also many new investments announced during the Airshow. Our business-friendly environment, talented workforce and strategic location in the heart of Asia, have made Singapore the location of choice for aerospace multinationals seeking to expand their footprint in this growing Asia-Pacific market. We welcome these investments and look forward to furthering our partnership with the industry to achieve even greater success.”

Experia Events specializes in organizing and managing exhibitions and conferences of strategic interest, fostering industry development and thought leadership. It has built a strong portfolio in aerospace and defense with the highly successful Singapore Airshow, Asia’s largest and one of the most important aerospace and defense exhibitions in the world, and IMDEX Asia, the leading international maritime defense exhibition in Asia. Its expertise also extends to the government and lifestyle sector, through key events such as the inaugural ScreenSingapore, the Singapore International Water Week and World Cities Summit. With a sound track record underscoring its aspirations to stage events that influence, Experia Events aims to diversify its range of strategic events globally. For more information, visit:www.experiaevents.com.