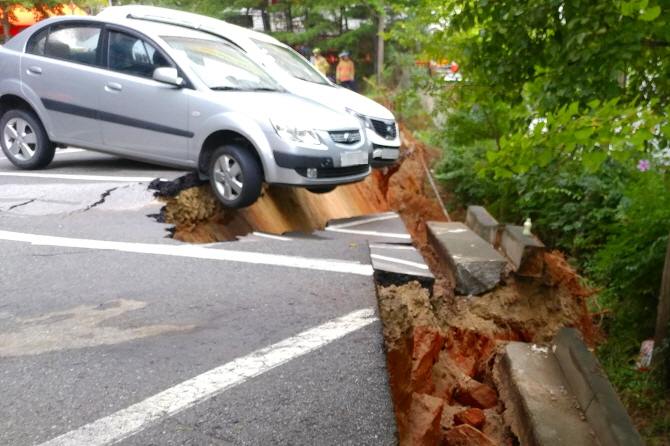 SEOUL, Aug. 31 (Korea Bizwire) — A large sinkhole opened next to a construction site in Seoul on Friday, causing hundreds of people in nearby apartment buildings to evacuate.

The 30-meter by 10-meter hole was created around 4:38 a.m. on a road between the apartment complex and the construction site in Gasan-dong in southwestern Seoul, forcing about 200 residents in the two apartment buildings to evacuate.

Wide cracks also developed in the parking lot of the apartment complex, and four vehicles were towed.

The construction site was for a 30-story building, but no work was under way at the time.

Witnesses said they heard an earthquake-like sound at the time.

“I couldn’t sleep because the sound was too loud,” a 58-year-old resident surnamed Kim said. “After hearing a roar, I came out and found the ground had collapsed.”

Two residents complained of psychological shock and were taken to hospitals.

Officials said recent torrential rains could have loosened up the soil and caused the hole.

Initial examinations showed no major problems with the apartment buildings. Detailed safety tests will take about one month or two to complete, officials said.