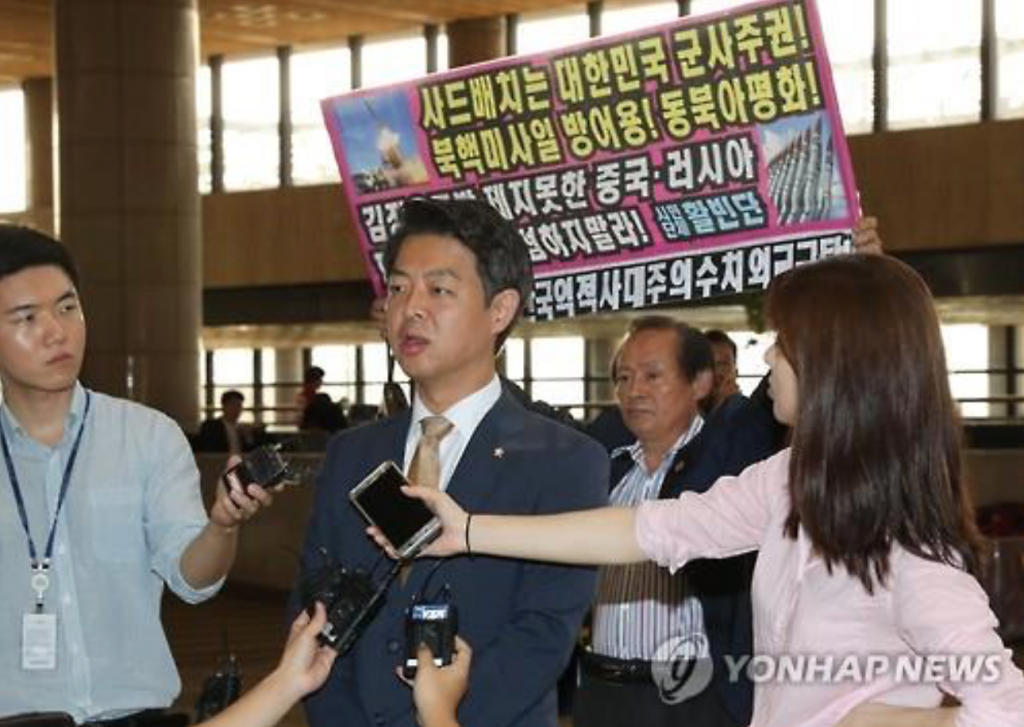 Minjoo Party of Korea Rep. Kim Young-ho speaks to the press before departing for China at Gimpo International Airport on Aug. 8, 2016. (image: Yonhap)

SEOUL, Aug. 8 (Korea Bizwire) – A group of lawmakers from the main opposition Minjoo Party of Korea (MPK) visited China on Monday for talks with Chinese officials and scholars over the planned deployment of an advanced U.S. anti-missile system to South Korea, a major thorn in the relations between Seoul and Beijing.

The six first-term MPK lawmakers brushed off intense opposition from the presidential office, ruling party and even those within their own party ranks who warned their visit would worsen the division among South Koreans over the deployment plan and only help strengthen China’s position against it.

“We are going to visit (China) to only contribute even a little to improving chilled diplomatic relations between South Korea and China,” Rep. Kim Young-ho, who leads the group, told reporters before departing for China.

Since Seoul and Washington announced their plan last month to install a Terminal High Altitude Area Defense (THAAD) system on the peninsula by end-2017, Beijing and its state-run media have ramped up their criticism of it, repeating that THAAD will undermine regional stability and China’s security interests.

During their stay in Beijing, the lawmakers plan to attend meetings with professors at Peking University, South Korean residents and South Korean press correspondents in China.

Upon arrival in China, the lawmakers were scheduled to meet South Korean Ambassador to China Kim Jang-soo, but the plan was canceled amid strong opposition by Seoul’s presidential office to their visit to Beijing.

Those close to the lawmakers said that they would use their visit to China to stress that economic and political relations between the two countries should not be marred by the THAAD issue, and call on Chinese media to refrain from reports that whip up anti-South Korea sentiment.

Dismissing mounting criticism over their visit to Beijing, the lawmakers have portrayed the visit as part of “parliamentarian diplomacy.” They said that their visit to China is a “diplomatic promise” that cannot be called off.

Two of the lawmakers — Reps. Kim and Park Jeung — have previously studied in China, while the other lawmakers have little or no relations or expertise regarding Chinese security and foreign policy issues.

During a meeting with her senior secretaries on Monday, President Park Geun-hye rebuked the opposition lawmakers, saying that they have “sympathized with China’s stance.” She also pleaded for bipartisan cooperation in handling security issues.

A day earlier, the presidential office Cheong Wa Dae called on the lawmakers to reconsider their plan to visit China.

Cheong Wa Dae also urged Beijing to take issue with Pyongyang’s nuclear and missile threats, instead of criticizing the plan to deploy a THAAD battery to the peninsula. It also called Chinese media’s criticism of the missile shield deployment plan “unreasonable.”