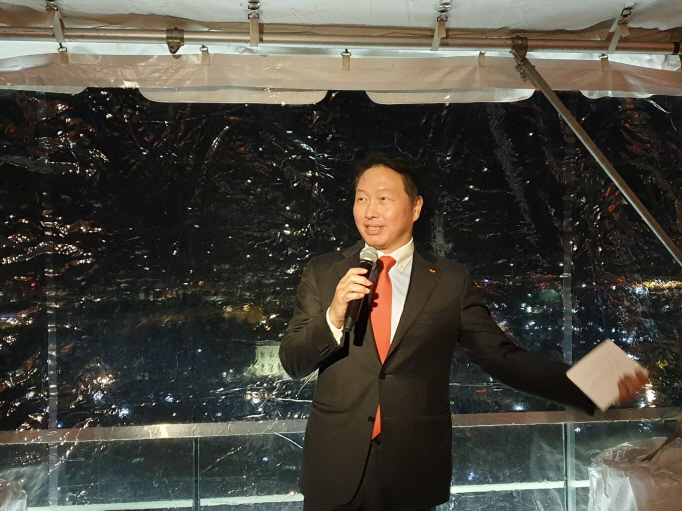 SK Group Chairman Chey Tae-won, speaking at a corporate event in Washington D.C., said that he hoped that SK would grow along with American society. (image: Yonhap)

SEOUL, Nov. 30 (Korea Bizwire) — Chey Tae-won, the chairman of SK Group, has revealed that the company is willing to boost investment in a new electric car battery plant in the U.S. state of Georgia.

Construction of the plant is expected to kick off next year.

Chey visited SK’s Washington D.C. office on November 28, where he announced the company’s plans to build an electric car battery plant in Georgia.

Approximately 1.8 trillion won (US$1.64 billion) has been earmarked into building the plant, which will create jobs for 1,400 people.

“If all goes well, we are considering injecting a total of 5.6 trillion won into the plant and hiring 6,000 people,” said Chey.

Earlier in the month, SK Innovation Co. announced plans to build an electric car battery plant aiming for the production of 9.8 GWh of batteries yearly from 2022 onwards.

Chey, speaking at a corporate event in Washington D.C., said that he hoped that SK would grow along with American society.

The business magnate also spoke of the importance of social capital, not just emphasizing the financial numbers of the business.

“This is also why SK Group opened its office in Washington D.C.,” emphasized Chey.