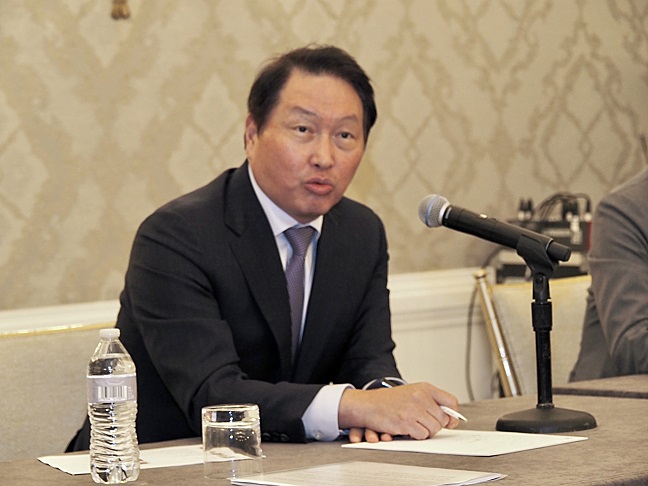 WASHINGTON/SEOUL, Sept. 22 (Korea Bizwire) — SK Group Chairman Chey Tae-won has said it is too early to define the impacts on South Korean businesses of U.S. policies favoring domestically produced semiconductors and electric vehicles and any plans should be drawn up based on careful assessments.

Chey’s remarks came as the administration of U.S. President Joe Biden has introduced a set of bills designed to boost support for U.S.-based chip investment and electric vehicle (EV) manufacturing, in a move widely seen as intended to counter China amid the intensifying rivalry between the two world powers.

“There are both opportunities and risks in the many moves surrounding South Korea’s key industries,” Chey said at the press conference with Korean correspondents in Washington.

“As the process is ongoing, I think it’s hard to say clear-cut whether it’s good or bad for us at this stage,” he said.

“Until the relevant laws and policies are finalized, we will have to carefully monitor the situation and consider appropriate responses,” Chey said.

The Inflation Reduction Act, signed by Biden in August, gives up to US$7,500 in tax credits to buyers of EVs assembled only in North America, sparking concerns that Hyundai Motor Co. and Kia Corp., the two major South Korean automakers, will lose ground in the U.S. market, as they make EVs at domestic plants for export to the U.S.

The chips bill calls for tax credits for corporate investment in semiconductor manufacturing in the U.S., but the “guardrails” in the legislation ban recipients of tax credits and other benefits from expanding their chip production facility in China for 10 years.

South Korean tech giants, like SK hynix Inc. and Samsung Electronics Co., that operate production lines in China, have been cited among the global companies feared to take a hit from the new regulations.

South Korea has stepped up efforts on both the government and business fronts urging the U.S. to create exceptions for Korean-made EVs, saying the clauses will discriminate against Korean companies.

Chey, the leader of South Korea’s second-largest conglomerate by assets, highlighted the importance of making investments in foreign markets, which in turn, help bolster the domestic investment in Korea.

“Investing in foreign markets is essential,” he said. “By investing and internalizing the technologies that we don’t have, like advanced packaging, and continuing that through domestic investment, we can bolster our competitiveness,” Chey said.

In July, Chey announced detailed plans for a $22 billion investment plan in the United States in a rare virtual meeting with U.S. President Joe Biden. SK has committed to investing $52 billion in America through 2030.