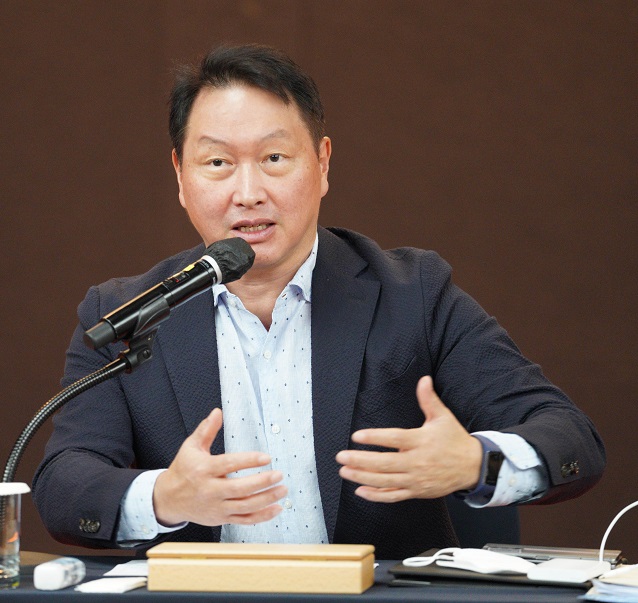 SK Group Chairman Chey Tae-won, who doubles as chief of the Korea Chamber of Commerce and Industry (KCCI), speaks at a media roundtable during a forum hosted by the KCCI in Jeju on July 13, 2022, in this photo provided by the KCCI the following day.

Chey made the remarks at a forum in Jeju this week, noting the effect of the global easy-money policy over the past decade, coupled with global supply disruptions, and a surge in energy and commodity prices, triggered by Russia’s war in Ukraine, are unraveling.

“Costs have risen sharply in materials sectors, so we can’t help but make adjustments if we can’t push ahead with the investments as planned,” Chey said Wednesday in a media conference during a three-day forum hosted by the Korea Chamber of Commerce and Industry (KCCI). Chey doubles as the KCCI head.

“It is possible to delay the investment strategically and tactically as borrowing costs keep going up,” he said.

SK, South Korea’s second-largest conglomerate by assets, unveiled in May a 247 trillion-won (US$189.4 billion) plan for five years to bolster investment in semiconductor, electric vehicle battery and bio businesses.

“Although they could be delayed, it doesn’t mean we won’t do (invest) it,” Chey added.

Chey pointed out inflation poses a serious challenge to companies as they have to grapple with the wage increase, particularly small and medium-sized firms (SMEs) that make up the majority of employment in the country.

“I think the difficulties will be doubled on the SMEs side,” Chey said.

Despite the dim outlook on the economy, Chey expressed optimism South Korean businesses will remain resilient.