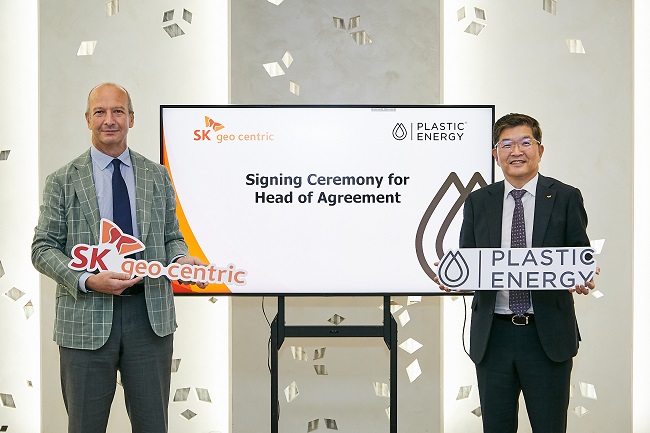 SK Geocentric CEO Na Kyung-soo (R) and Plastic Energy CEO Carlos Monreal pose for photos during a signing ceremony for their partnership for plastic pyrolysis, in this photo provided by SK Geocentric on Nov. 16, 2022.

The head of agreement, signed with the London-based Plastic Energy Ltd., commits the two companies to build the 66,000-ton plant in the industrial city of Ulsan, about 300 kilometers southeast of Seoul, by the second half of 2025, the Seoul-based company said.

Pyrolysis refers to a technology that converts plastic waste into raw materials, such as oil and gas, to be reused as feedstock for new plastics.

The process is considered environmentally friendly as it takes high-temperature heating for the chemical degradation in an environment with limited oxygen, instead of burning the waste.

In the same complex, SK Geocentric will also build a post-processing plant for pyrolysis oil produced from the pyrolysis facility.

The two will also explore business opportunities for plastic pyrolysis projects in South Korea and other regions in Asia, SK Geocentric said.