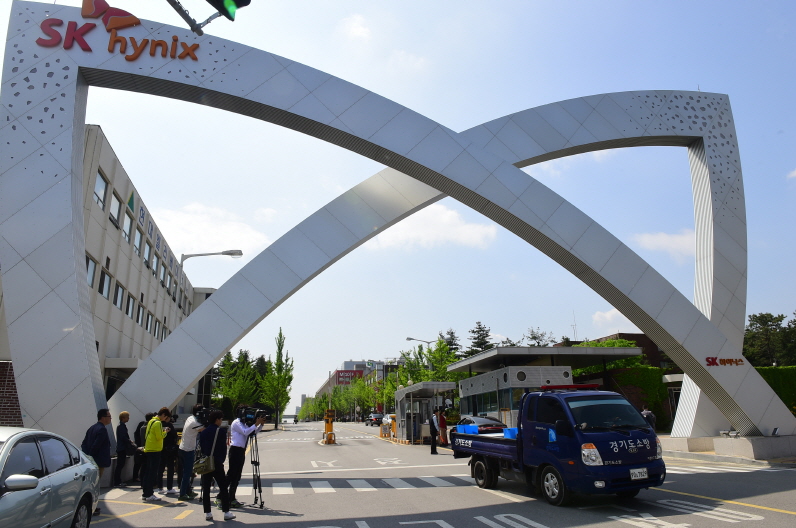 The record-breaking net profit came to 2.46 trillion won (US$2.2 billion), soaring from 286 billion won a year earlier, the company said in a regulatory filing.

The ratio of operating gain to revenue came to a whopping 46 percent, also setting a new record by beating 40 percent posted in 2004.

SK hynix said the robust performance is attributable to the favorable market conditions coupled with the rising price of chips.

SK hynix said its shipment and average sales price of DRAM chips advanced 3 percent and 11 percent, respectively, from the previous quarter on the back of expanded sales of server DRAM products.

While the shipment of NAND flash edged down 6 percent on-quarter on slowed demand of smartphones, SK hynix said the average sales price still moved up 8 percent over the cited period.

The company said it expects to rake in strong earnings in the second half of 2017 on the back of server DRAM products and the release of new smartphones.

Experts said the rising demand for memory chips around the globe amid supply shortages will allow SK hynix to enjoy an operating profit of nearly 3.5 trillion won in the third quarter.

The South Korean tech giant’s latest efforts to join the acquisition of Japanese Toshiba Corp.’s memory business is also casting a brighter outlook over its profitability, they added.

SK hynix, meanwhile, said it plans to expand the production of DRAM and NAND flash this year to meet the rising global demand.

“As for DRAM chips, we cannot fulfill the market’s demand just by changing production methods,” the company said. “By the end of this year, we plan to expand production facilities for DRAM and NAND products.”

In line with the efforts, SK hynix said it is also considering completing the construction projects in China and Cheongju, about 120 km south of Seoul, by 2018, instead of the original plan of 2019.

The company added it is not currently considering a share buyback amid business uncertainties, including the Toshiba deal.

Shares of SK hynix closed at 70,400 won on Tuesday, down 3.56 percent from the previous session. The second-quarter report was released before the market opened.