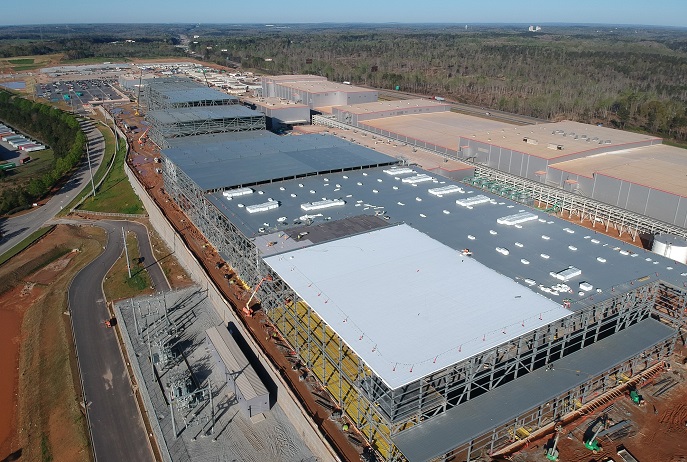 SK Innovation Co.’s battery factory under construction in the U.S. state of Georgia is seen in this file photo provided by the company on Sept. 28, 2021.

A joint venture between the two companies, called BluOvalSK, will build an assembly and battery complex in Tennessee, and two additional battery factories in Kentucky, which will be the single largest investment in Ford’s 118-year history, the two companies said in a statement.

The three factories will have a combined production capacity of 129 gigawatt-hours (GWh), enough to supply 2.15 million EVs a year.

SK Innovation will invest 5.1 trillion won over the next five years, while Ford will cover the rest.

SK Innovation, a refinery-and-battery unit under South Korea’s No. 3 conglomerate SK Group, already has been building a $2.6 billion battery factory in Georgia, which will supply batteries for Ford’s F-150 EVs.

Together with the joint venture’s additional three factories, SK Innovation said it will become the largest battery supplier in the U.S. with a combined capacity of over 150 GWh by 2025.

SK Innovation is set to split off its battery unit Friday to foster the new growth driver under its plan to invest 30 billion won by 2025 to transition from a carbon-intensive model to a green business.