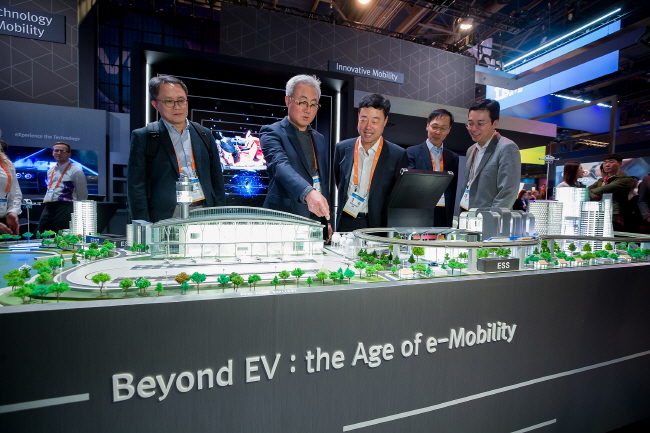 SK Innovation CEO and Presient Kim Jun (2nd from left) and other executives look around the firm’s booth at this year’s Consumer Electronics Show in Las Vegas, Nevada on Jan. 8, 2020. (image: SK Innovation)

SK Innovation CEO and President Kim Jun made the comments in an interview with the company’s in-house news channel that was provided to employees Wednesday as the company strives to strengthen its battery and materials businesses.

Kim did not provide any further details on proposed investments.

SK Innovation is South Korea’s top oil refiner, but it has been stepping up its investments in the EV battery business since 2008 as part of efforts to find new revenue sources.

SK Innovation has invested 1.9 trillion won (US$1.6 billion) to build a car battery plant with a capacity of 9.8 gigawatt hours (GWh) per year in the U.S. state of Georgia. Construction of the plant is 30 percent complete.

SK Innovation said it will decide before June whether to build a second plant with a capacity of 10 GWh in Georgia.

The move is meant to meet soaring demand for all-electric vehicles amid a global push for zero emissions.

Currently, SK Innovation has three battery plants in operation, in South Korea, China and Hungary, with a combined capacity of 19.7 GWh, enough to supply batteries to about 400,000 electric vehicles.