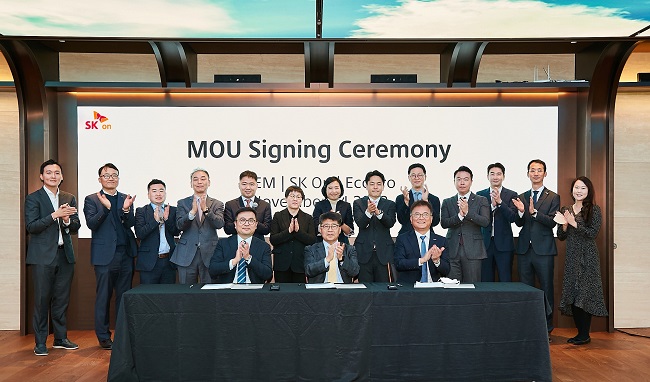 (From L to R) Jiang Miao, vice president of GEM; Shin Young-kee, vice president of SK On’s battery procurement division; Park Sang-wook, vice president of EcoPro; and other officials pose for a photo during a signing ceremony for the initial agreement on building a nickel production facility in Indonesia on Nov. 24, 2022, in this photo provided by SK On the next day.

The memorandum of understanding (MOU) was signed Thursday with EcoPro Co., a South Korean cathode producer, and Green Eco-Manufacture (GEM), a Chinese battery component maker, to build a factory to produce mixed hydroxide precipitate (MHP) in the Morowali industrial complex in Central Sulawesi, SK On said in a release.

The MHP is an intermediate nickel product and feedstock for nickel sulfate used to make battery-grade precursor.

A precursor refers to a specific chemical form containing nickel, cobalt, manganese and aluminum before turning into cathodes, one of the key materials in lithium-ion batteries.

The factory will aim to produce MHP containing 30,000 tons of high-purity nickel starting in the third quarter of 2024. That is enough to produce 43 gigawatt hours of EV batteries, which can power about 600,000 EVs.

With the MHP facility, the three are also considering producing nickel sulfate and precursors in South Korea, a move that will help SK On continue its operations in the United States following the enactment of a new U.S. law on EV tax credits.

The Inflation Reduction Act, signed into law in August, requires EV batteries over the years to be made with higher portions of minerals processed or mined in the U.S or elsewhere that have free trade pacts with the country.

South Korea has an FTA with the U.S.

The IRA has prodded South Korean automakers and producers of EV batteries and battery components to quicken their steps for facility expansion in North America or bolstering partnerships with the U.S. and its partner countries, like Canada and Australia.

SK On has been bolstering efforts to secure the battery components supply amid the changing industry landscape. It signed earlier this month a five-year lithium supply deal with Chile’s SQM for 57,000 tons of the critical battery material.

SK On has also made an equity investment in an Australian miner, Lake Resources, and clinched a 10-year supply deal for 230,000 tons of lithium.