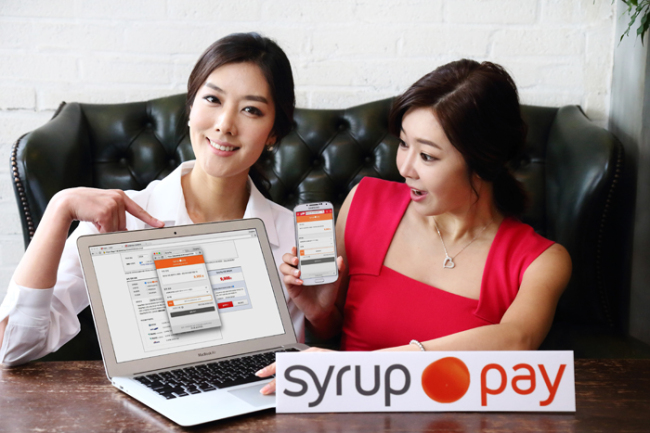 Its Syrup Pay operates on a password-based system for which a customer only needs to set a six-digit code to identify him or herself when logging on to an online site. (image: SK Planet)

Its Syrup Pay operates on a password-based system for which a customer only needs to set a six-digit code to identify him or herself when logging on to an online site, the company said in a statement.

Users can register as many credit cards as they want with the payment tool. It doesn’t need them to download the payment program for every different website they visit as Syrup Pay will automatically recognize their user IDs.

The new payment platform is available in both PC and mobile versions, through all e-commerce channels run by SK Planet, including 11st Street, the company said.

SK Planet has signed tie-ups with four local credit card companies including Shinhan Card to provide the service. It plans to add another three by the end of this month so that Syrup Pay can extend its reach to a larger number of credit card holders from May.

The launch of Syrup Pay comes on the heels of the latest policy move by the government to remove the complex and out-of-date security downloads required by most web and mobile sites that involve wireless payments.

ActiveX, a plug-in software created by Microsoft, has widely been used as the common security platform that every Internet user had to download in order to proceed with an online payment.

But the program has turned into a bane as it caused inconvenience for users who faced multiple downloads for every type of device owned and a string of upgrades that often resulted in a system clash.

South Korea’s ICT ministry pledged last week to remove 90 percent of the ActiveX programs embedded in the top 100 websites in the country and replace it with new systems.