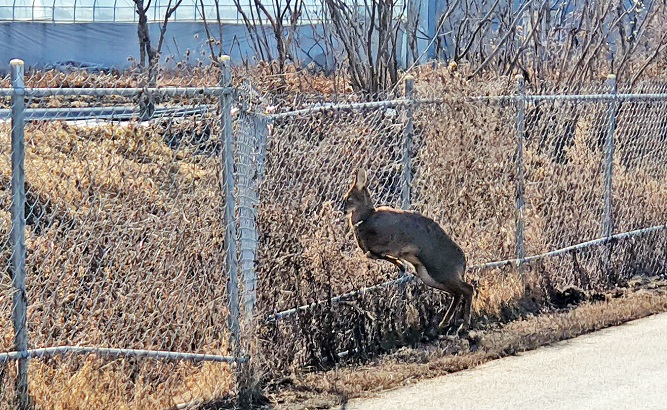 Recently, an elk was found trapped in a ditch on the side of a road in Hwacheon County after a metal fence blocked it from climbing back up the hill. (Yonhap)

CHUNCHEON, Jan. 29 (Korea Bizwire) — Metal fences set up across hills and pig farms in Gangwon Province to contain the spread of the African swine fever (ASF) are posing a risk to the survival of wild animals other than boars.

Elk residing in mountainous areas and other wild animals need to descend to the nearest stream for water and lowlands for food, and the metal fences stand in their way.

Those that manage to jump over the fences can’t go back up, and must search for other ways to climb up the hill, exposing themselves to the dangers of the road.

Recently, an elk was found trapped in a ditch on the side of a road in Hwacheon County after a metal fence blocked it from climbing back up the hill.

Mountain goats, a level 1 endangered species and a natural monument, appeared in a video lost in the woods because of the metal fences.

Gangwon Province reportedly failed to set up passages for other wild animals with the sole aim of shutting down the spread of the pig disease. Now, the fences are a threat to wild animals that need to survive the winter.

“Most of the fences have been set up across roads, which often divide the hills from farmlands and streams. It’s a serious threat to wildlife,” said a source familiar with wildlife rescue operations.

“The fences may expose many wild animals to the risk of being run over by cars.”

Other experts, on the contrary, argue that the metal fences were an inevitable choice to contain the spread of ASF, and can actually prevent roadkill.

“ASF is a national disaster, and setting up the fencing was inevitable,” said an animal expert. “The fences block the animals from entering roads, reducing the risk of roadkill.”