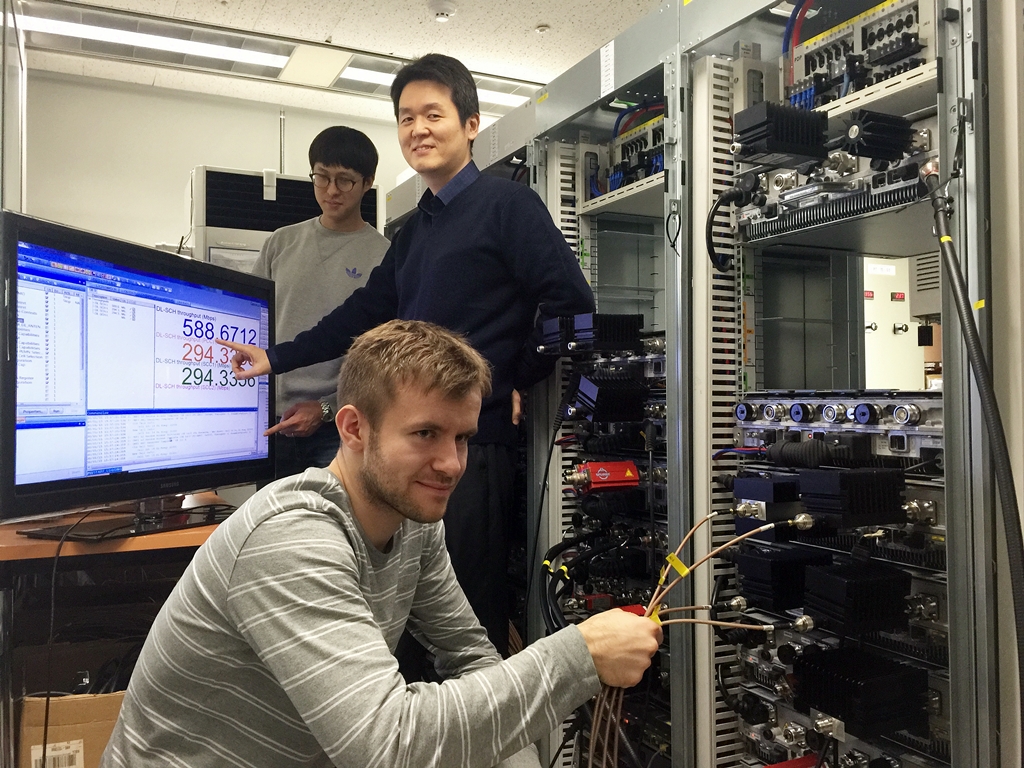 When applied to the current LTE system which utilizes two transmit antennas and two receive antennas, the new antenna technology will double the maximum downlink speed of LTE using 10 MHz bandwidth from 75 Mbps to 150 Mbps.

The demonstration will also be shown at the 2015 GSMA Mobile World Congress to be held in Barcelona, Spain from March 2.

Since a mobile device with four antennas and CA capability has not been developed yet, the two companies used a mobile device simulator made by Aeroflex, a global leader in the test and measurement instrumentation market, to measure the data speeds during the demonstration.

SK Telecom and Nokia Networks said that the demonstration of peak download speeds of 600 Mbps through high rank MIMO is meaningful since it will serve as a key technology in achieving early commercialization of 5G networks, which will require the application of massive MIMO technologies to accommodate hundreds of times more data than today’s LTE networks.

Tero Kola, Head of LTE Product Management, Nokia Networks, said, “Partnering with SK Telecom, we have demonstrated the simultaneous operation of 4X4 Multiple-Input Multiple-Output (MIMO) technology and Carrier Aggregation at an LTE base station. Together, we continue to break ground and pave the way for 600 Mbps LTE-Advanced services.

Park Jin-hyo, Senior Vice President and Head of Network Technology R&D Center at SK Telecom said, “This successful demonstration of 4X4 MIMO technology not only strengthens our competitiveness in LTE-A, but also marks another important milestone in our journey towards achieving the next-generation network.”

SK Telecom (NYSE: SKM, KSE: 017670), established in 1984, is Korea’s largest telecommunications company with more than 28 million mobile subscribers, accounting for over 50% of the market. The company reached KRW 17.164 trillion in revenue in 2014. As the world’s first company to commercialize CDMA, CDMA 2000 1x, CDMA EV-DO and HSDPA networks, SK Telecom launched the nation’s first LTE service in July 2011. SK Telecom also became the world’s first mobile carrier to commercialize 150Mbps LTE-Advanced in June 2013 and 225Mbps LTE-Advanced in June 2014 through Carrier Aggregation(CA). In line with its efforts to swiftly move towards the next-generation mobile network system, or 5G, it successfully commercialized 300Mbps tri-band LTE-A CA. As of December 2014, the company has over 16.7 million LTE and LTE-Advanced subscribers. Based on its strength in network operations business, SK Telecom is seeking new growth engines in areas of platform, Big Data and convergence business. For more information, please visit www.sktelecom.com or email to press@sktelecom.com.