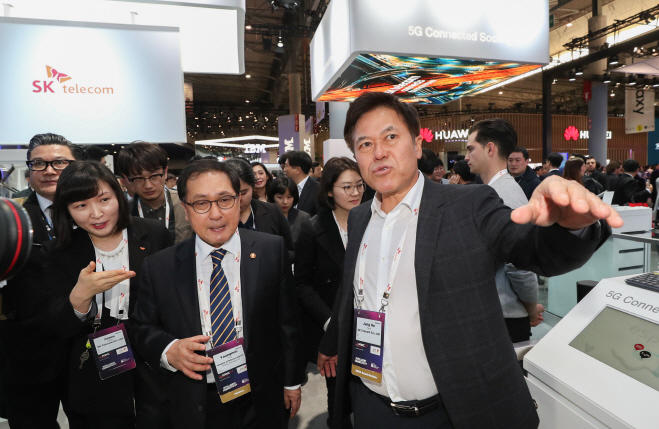 Park Jung-ho, CEO of South Korea’s leading mobile carrier, said his company has been negotiating with major AR gear and content developers, including Magic Leap and Niantic, to expand its global partnership in mixed reality technologies.

Talks have also been underway with Niantic, an American software company known for the mobile AR game Pokemon Go, to cooperate in developing augmented and virtual reality content.

“In the era of 5G, AR glasses will integrate smartphones and laptops and replace TVs,” Park said in a press briefing at MWC Barcelona. “With AR glasses, users will be able to watch TV in various sizes or look at the sports game with professional sports relay broadcasting and real-time data at a glance within the next 1-2 years.”

The telecom operator will also push to develop augmented and virtual reality content for its own e-sports team, T1, to grab a bigger chunk of the rising entertainment market, Park said.

During the biggest mobile show of the year, SK Telecom reached an agreement with Comcast Spectacor, a game unit under U.S. media and entertainment giant Comcast, to establish an e-sports joint venture tasked with global team operation and content development.

The telecom company said it will also upgrade its media services with original content and expand global partnerships in the face of toughening competition with global streaming giants such as YouTube and Netflix.

Last week, SK Telecom said its fixed broadband subsidiary SK Broadband will merge with No. 2 cable TV operator, t-broad, paving the way for the expansion of the telecom’s media business.

The firm said the latest merger and acquisition move is expected to increase its consumer base both in the mobile and pay TV markets and set the ground for its global push.

“We will draw investment at home and abroad with the entities to expand original content targeted for the global market, bringing fresh momentum to the Korean media industry, and establish the foothold for local providers’ bid in the global market,” he said.