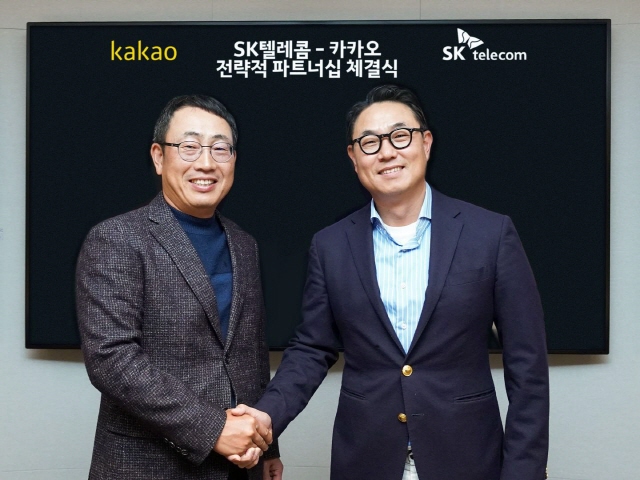 Under the agreement, SK Telecom and Kakao will exchange about 300 billion won (US$258 million) worth of shares. SK will receive 2.18 million shares, while Kakao will get 1.27 million shares.

“The two companies agreed on the need for cooperation and openness in broader terms to strengthen global competitiveness,” SK Telecom said in a press release.

The two rivals will work closely in four sectors — communications, e-commerce, digital content and future ICT — that are considered new growth engines in the 5G era.

In the communications sector, SK Telecom will merge its customer services with KakaoTalk, the country’s most popular messaging platform.

In particular, the companies will work on ways to strengthen their customer services to deliver a new shopping experience for their customers.

In the long term, the two sides plan to create new cutting-edge technologies in such areas as artificial intelligence (AI) and the Internet of Things (IoT).

“This partnership with Kakao will serve as an important starting point to strengthen the competitiveness of South Korea’s ICT ecosystem,” said Yoo Young-sang, head of the mobile network business at SK Telecom.

The partnership will be spearheaded by a new unit that will be headed by Yoo and Yeo Min-soo, Kakao’s co-CEO.