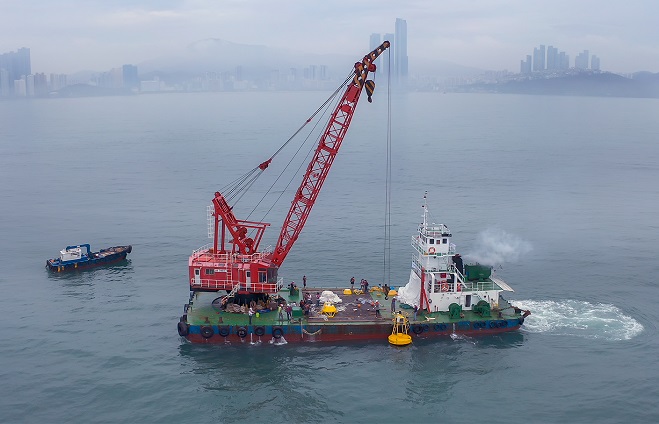 This photo provided by Sk Telecom Co. shows the installation of a base station near Gwangan Bridge in Busan.

The study, conducted in tandem with Hoseo University and the Korea Atomic Energy Research Institute, was carried out by installing and testing related equipment in seas with a depth of about 30 meters at a location about four kilometers away from the Gwangan Bridge in Busan from Aug. 23-27.

A base station installed in the sea adjacent to the bridge and an underwater sensor node mounted with a marine pollution detection sensor measured the degree of seawater pollution at an interval of 10 minutes and sent the measured results in an acoustic wave format through an underwater base station to a marine buoy.

The marine buoy then relayed the measured results to an underwater data management platform on land.

The management platform monitors and manages underwater sensors and base stations, as well as a variety of information, including the location and structure of the base station controller and the temperature and salinity of the seawater.

SK Telecom claimed that it was the first time in the world for an underwater base station to be employed to detect a variety of problems that can occur in seawater on a real time basis.