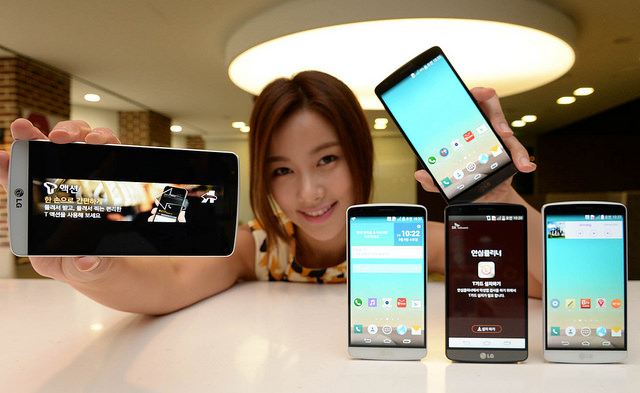 The SK telecom-launched new edition is designed to be more compact than the original G3 — from an original 5.5-inch display to 5.2-inch one — to be able to fit nicely on to a palm. (image: LG Electronics)

SEOUL, Aug. 8 (Korea Bizwire) – SK Telecom announced that it will roll out the “G3 A,” its unique edition of LG Electronics-developed premium smartphone “G3,” on August 8.

The SK telecom-launched new edition is designed to be more compact than the original G3 — from an original 5.5-inch display to 5.2-inch one — to be able to fit nicely on to a palm, and will be released in two colors: titanium and white.

Apart from the palm-held size, the newest edition will also be empowered with several of unique technologies of SK Telecom. One of them is the “3D metallic printing cover” which will be coated on to the screen of the G3 A which will prevent fingerprint smudges and finger slipping.

The most prominent new feature of the G3 A is indeed the “T action” feature. The “T Action” feature utilizes the motion of rotating to activate different functions, as pressing a button will, and allows user to use main features of the smartphone with just one hand. The G3 A will be the first smartphone to be embedded with the cutting-edge technology.

By simply “snapping” the device, calls can be made and answered or “selfies” can be taken. The feature can be set to perform other tasks such as playing the next song on the music list or hitting the “back” button while web surfing, on the user’ convenience.

“Safe Cleaner” is another unique feature that will be newly added to the spick-and-span edition. Developed by SK Telecom to safeguard the smartphone from malignant apps and smishing attacks, the embedded feature will automatically perform inspection for vicious apps and smishing messages within the device and erasing of unnecessary files in such times when the phone is less likely to be used as late nights or early mornings, to maintain the device in clean state.

The Safe Cleaner app also comes with the “Antitheft Alert” function, which sounds alarm automatically when a password isn’t entered within a set time from the moment in which the device was separated from the charger. This will greatly help prevent having the phone stolen when left to charge in an open space.

The flagship features of the “G3″ such as “Laser Auto Focus,” which instantly focuses the camera on the subject by measuring the distance between the device and the subject with the shooting of the laser beam, and the “Knock Code,” the popular and acclaimed security feature, will be equipped as well in the new version.

A director at SK Telecom’s Smart Device department said, “As the smartphone market reaches maturity, more people are seeking a phone with customer-tailored features and compact designs. We will continue to put efforts to meet various needs of our customers and to provide palpable values.”

One thought on “SK Telecom Launches “G3 A,” Compact Edition of G3 with New Advanced Features”