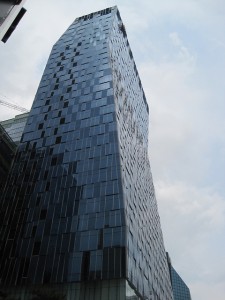 SK Telecom had 49.6 percent of the market in February with 28.3 million users. (image: Robot Brainz/flickr)

According to data compiled by the Ministry of Science, ICT and Future Planning, SK Telecom had 49.6 percent of the market in February with 28.3 million users, including those from mobile virtual network operators (MVNOs) that rent SK’s networks.

SK Telecom has held on to over 50 percent of the local market since 2002 when it took over another carrier, Shinsegi Telecom, in 2002.

The company said the drop has to do with the closing of some 450,000 pre-paid accounts that have not been used for a long period.

“We have to admit the potential of the mobile industry had been held back by self-devouring competition (for a higher market share),” SK Telecom said. “We took the lead as a turning point to correct such irregularities and maximize subscribers’ benefits.”