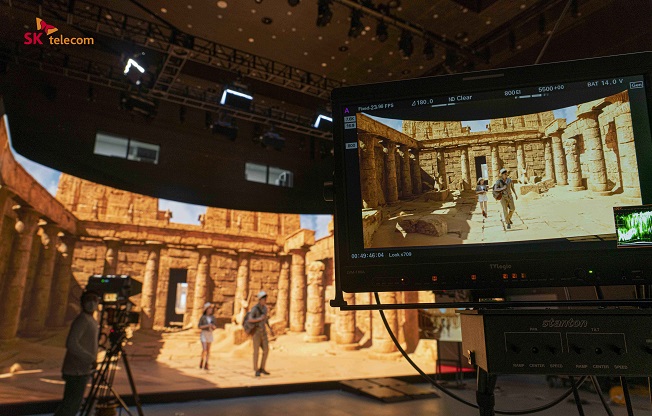 This photo provided by SK Telecom shows the carrier’s VFX studio in the “2nd Techno Valley” in Pangyo, just south of Seoul.

The TEAM Studio is a visual effects (VFX)-based media content studio with a floor space of about 3,050 square meters.

It consists of a U-shaped ballroom stage that is 21 meters long and 5 meters high, an extended reality (XR) stage featuring a length of 5 meters and a height of 3 meters, and two LED wall stages mounted with LED screens on the floor.

The ballroom stage is optimized for the creation of entertainment content that requires various background screens for TV shows, advertisements and music videos.

The XR stage is an optimal choice for the creation of content that requires an indoor background, including live commerce.

The LED wall stage enables users to produce real-like graphics without having to shoot on location.

SK Telecom plans to open the studio not only to its affiliated companies for video content production but also to various partner companies, including external content producers.