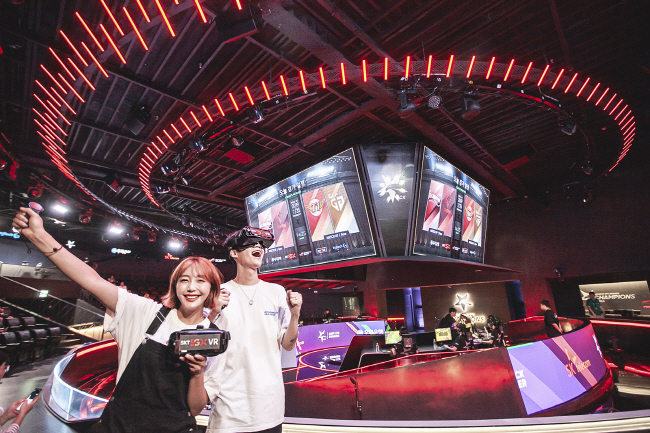 Its operating earnings came to 322.8 billion won (US$270.7 million) in the April-June period, a 6.9-percent fall from a year ago, the nation’s leading mobile carrier said in a regulatory briefing.

The firm’s net income tumbled 71.7 percent to 259.1 billion won over the three-month period due to losses from equity ties with chipmaking affiliate SK hynix Inc.

The telecom operator holds a controlling 20 percent stake in the major chip maker, which posted lackluster earnings in the second quarter.

The carrier launched commercial 5G service in early April and has aggressively marketed to attract premium users in the early stage of the new service.

SK Telecom said it has some 530,000 5G subscribers for a 40.8-percent market share as of June, noting the pace of service’s growth was “faster than expected.”

“We expect (the number of 5G users) to surpass 1 million within August and have at least 2 million this year,” Yoon Poong-Young, the chief financial officer of SK Telecom, said during a conference call.

“Considering the current pace, we expect 5G users to go over 7 million in 2020.”

In 2019, Yoon said capital expenditure will increase 30-40 percent from a year earlier with continued buildup of 5G infrastructure, without elaborating on the exact amount of the investment.

Its IPTV service subscribers topped 5 million as of June.

The strong performance of its media business came as the telecom giant earlier this year signed merger deals of its subsidiary, SK Broadband, and No. 2 cable TV operator t-broad, as well as an integrated over-the-top (OTT) service with the nation’s three terrestrial broadcasters.

Together with t-broad’s cable TV subscribers and SK Broadband’s IPTV users, the merged company is expected to have 8 million TV viewers, accounting for 23.8 percent of the country’s pay TV market.

“We will have a total media platform after the merger of cable TV and IPTV, and will launch an integrated OTT service this year once the processes are completed,” Yoon said.

“We expect to have over 10 million pay TV subscribers early next year.”

Shares of SK Telecom advanced 3.28 percent to 252,000 won on the Seoul bourse, versus KOSPI’s 0.95 percent fall. The quarterly results were released during the trading hour.