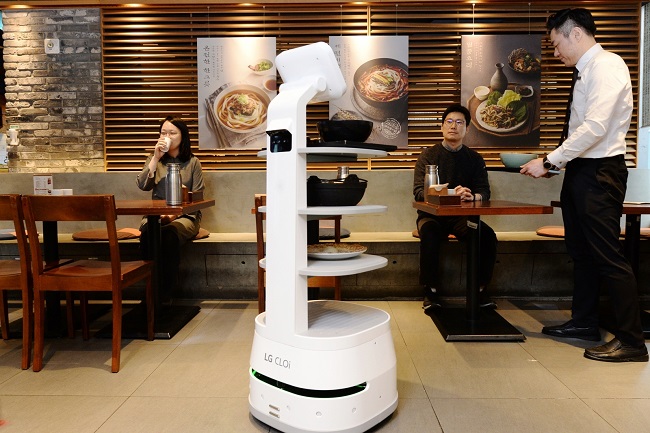 This photo taken on Feb. 3, 2020, and provided by LG Electronics Inc. shows the company’s serving robot at a restaurant in Seoul.

SEOUL, Nov. 12 (Korea Bizwire) — Many serving robot businesses have been found to import Chinese-made serving robots and misrepresent them as being their own product.

Industry insiders reported that more than 70 percent of all serving robots in South Korea are Chinese-made.

Chinese-made robots have been expanding in the South Korean market driven by their relatively cheap rental price.

In contrast, the monthly rent for a Chinese-made PuduTech robot is only 1.3 million won.

China has established a robot industrial cluster in Shenzhen and Dongguan in Guangdong Province, offering massive subsidies to robot manufacturers. The subsidies were known to cover more or less 20 percent of all profits.

The IT industry in South Korea is warning not to underestimate the expansion of Chinese-made serving robots, since they integrate various cutting-edge technologies in the robot manufacturing industry.

In a worst-case scenario, the country may turn out to become a testbed for bolstering the competitiveness of Chinese-made robots.

The U.S. has been adding a 25 percent tariff on Chinese-made robots since 2018 to protect its robot industry.

South Korea, in contrast, has no restrictions on importing Chinese robots.