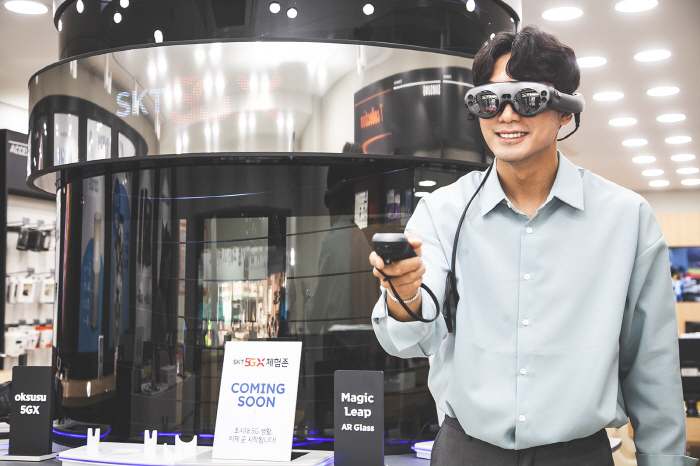 SEOUL, Apr. 3 (Korea Bizwire) — SK Telecom Co. said Wednesday it will offer a wide range of mixed reality game and media content for its 5G customers to take advantage of its new mobile network set to launch later this week.

The prime and platinum plans, priced at 89,000 won and 125,000 won, respectively, offer unlimited data usage this year for those who register before the end of June, along with free membership for its exclusive media and game content.

SK Telecom said it will apply a “zero-rating” policy to users of its over-the-top content to enable them to enjoy VR and high-quality video content without data deductions from their monthly data cap. The company will provide up to 5 gigabytes of free data for users of its mobile and VR games.

As 5G technology will be able to handle far larger data volumes with little latency, the telecom company has struck partnerships with global game developers and content providers to offer “killer content” available on 5G smartphones.

The Korean firm plans to offer AR content jointly developed by Magic Leap, and VR and AR versions of “League of Legends,” one of the most popular e-sports in the nation, in partnership with U.S. game developer Riot Games.

It has displayed Magic Leap’s AR headset in experience zones, which is a main competitor of Microsoft’s HoloLens.

Besides the commercial service, the company plans to expand global partnerships in the B2B area to create new business opportunities in mobile edge computing, an important 5G platform that can rapidly process content at the very edge of the mobile network.

“AR, VR, game and media services are just the beginning of the 5G service,” SK Telecom CEO Park Jung-ho said in a media showcase event. “We will continue to show off innovative 5G services to lead the new ICT sector.”

SK Telecom said it has installed approximately 34,000 5G network stations nationwide so far, claiming the widest coverage among the nation’s three carriers. It vowed to increase the number to over 70,000 by the end of the year, hoping to attract over 1 million 5G users in 2019.

The company said its 5G network will cover major spots in 85 cities, including downtowns, subway stations, stadiums and tourist attractions.

Its dual connectivity technology, which combines 5G and 4G LTE mobile networks, will deliver up to 2.65 gigabytes per second (Gbps) wireless speed and the speed will rise up to 7 Gbps next year, the firm said.