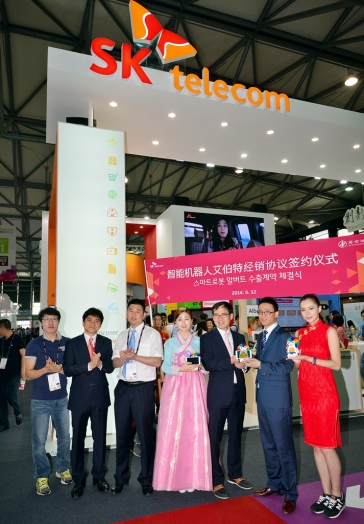 SK Telecom announced that it concluded a contract to supply its Smart Appcessories including Albert, a smart robot, and Smart Beam, a small-sized pico projector for all HDMI devices, to the Chinese market, signaling the company’s entry into the emerging ICT country. (image credit: SK Telecom)

Seoul, Korea, June 12 (Korea Bizwire) – SK Telecom (NYSE:SKM) today announced that it concluded a contract to supply its Smart Appcessories* including Albert, a smart robot, and Smart Beam, a small-sized pico projector for all HDMI devices, to the Chinese market, signaling the company’s entry into the emerging ICT country.

At Mobile Asia Expo 2014 held in Shanghai on June 12, SK Telecom signed a contract to export 30,000 units of ‘Albert’, a smart robot, to JSD (SHANXI JIA SHI DA Robot Technology Co.Ltd), the No.1 distributer of domestic robots in China.

JSD currently operates 45 offline stores across China and the number of the stores is expected to exceed 100 by the end of year. For Albert, JSD will secure about 100 dedicated personnel and run demonstration centers.

By mutually interacting with the robot, the user can efficiently learn through five senses and sensibility and multimedia effect of video/audio functions will make learning easier and interesting.

Using smartphones as its brain, Albert is easy to control. Also, it provides around 1,000 kinds of diverse contents including English learning content and entertaining functions suitable for children such as robot soccer.

At the signing ceremony, Cao Rui, Managing Director of JSD, said, “Signing this contract, the two companies will introduce the Korea’s leading ICT-applied smart robot to Chinese customers who have high expectations for their children’s education and I believe we can set the stage for infinite growth and ceaseless value creation for customers in China.”

SK Telecom sees this deal as evidence of global competitiveness of Albert in terms of its educational effectiveness and the company plans to focus on creating contents for the global market hoping to create a new ‘Korean ICT Wave’.

Meanwhile, last April, SK Telecom also concluded a contract with WanChang Group, a China-based distributor of IT products, to supply 10,000 units of Smart Beam, an ultra-mini pico projector for smartphones.

Cumulative sales of Smart Beam have reached as many as 80,000 units since its launch in September 2012 and it is also being sold at Korean Air and Asiana Air’s in-flight duty free shop as a premium IT product.

Moreover, as Smart Beam is globally recognized for distinctive competitiveness, SK Telecom exported around 8,000 units to seven different countries including Germany and Japan last year. Earlier this year, the company signed a sales contract with a Brazil’s biggest distributor of mobile devices to provide 5,000 units.

While Smart Beam is to be launched in China from June in line with the sales contract with WanChang Group, SK Telecom is also currently in talks with device distributors of other overseas markets such as Japan, the U.S. and Denmark. The company set its sales target to be 200,000 units for this year alone expecting sales of the product to dramatically grow. For the company, Smart Beam’s entry into China is especially meaningful as the country is a newly emerging ICT consumer market and therefore can further boost global growth of the product.

SK Telecom’s Smart Appcessories including Smart Beam and Albert could draw global attention as a result of the company’s efforts to create new customer value through convergence of smart devices and global expansion of multimedia content consumption with smartphones.