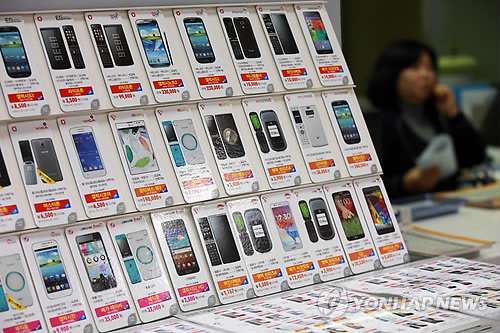 According to industry experts, one percent of Korea’s telecom market represents 570,000 customers, and mobile carriers are currently spending 8 trillion won every year to keep that 1 percent in their user pools.

SEOUL, Jan. 14 (Korea Bizwire) – The number of discount phone users reached more than 7 million in 2015 from 4.6 million in 2014. According to industry experts, the share of mobile virtual network operators (MVNOs) is expected to grow to 12 percent of the total mobile carrier market.

Due to the recently modified law on mobile device distribution systems, competition in the discount phone market will be aggravated, while the dynamics for the three big telecom companies, SKT, KT and LGT are set to remain at existing levels, or fall.

According to industry experts, one percent of Korea’s telecom market represents 570,000 customers, and mobile carriers are currently spending 8 trillion won (US$ 7,416 million) every year to keep that 1 percent in their user pools. SKT, KT and LG Uplus have been sharing the mobile carrier market in a ratio of 5:3:2 so far. Experts are predicting that if MVNOs continue to grow bigger, the three telecom companies will try to lead the market with their own MVNO subsidiaries out of fear of losing market share.

SKT’s subsidiary SK Telink started its MVNO business in 2013, and in partnership with large retailers such as E-mart, surpassed KT’s MVNO business in May 2014 and now has the largest share in the MVNO market. SKT is planning to maintain its successful pace by providing MVNOs with bulk access to Wi-Fi and roaming services at wholesale rates.

KT started its CJ Hello Vision MVNO business in 2011 and was the number one operator in the market before SK Telink’s success. KT is planning to regain its place by cooperating with strong MVNOs such as Home Plus, and by offering a variety of rate plans.

LG Uplus started its MVNO business through its subsidiary Medialog in 2014. LG Uplus is also set to supply Huawei’s feature phones to mark its place in the market.