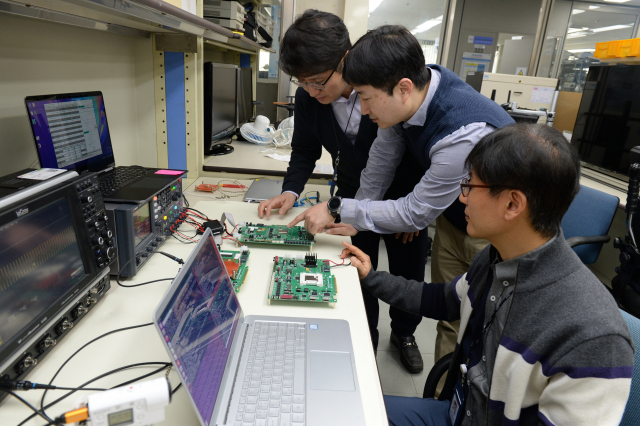 Since 2016, the ministry has been leading the development of AI semiconductors through national R&D projects including ETRI as well as private businesses. (image: Ministry of Science and ICT)

The Ministry of Science and ICT announced Tuesday that a joint research team from the Electronics and Telecommunications Research Institute (ETRI), SK Telecom Co. and others had developed a neural processing unit (NPU)-based AI semiconductor.

NPU refers to an AI processor that can simultaneously process large amounts of calculations by imitating the neural network of a brain. It is optimized for AI algorithm calculations.

AI semiconductors are capable of processing colossal amounts of data using less power. They are counted among the core technologies that are likely to alter the course of the AI industry.

Since 2016, the ministry has been leading the development of AI semiconductors through national R&D projects including ETRI as well as private businesses.

ULP AI semiconductors can be used in high-end servers that offer AI-based services such as cloud data centers.

The research team succeeded in minimizing the size of the chip for lower energy usage and lower production costs, while achieving excellent capability for calculation and energy efficiency by applying the most optimal design for AI calculations.

Researchers also made use of a software technology that can control the power of each core for energy efficiency. This ensures 40 teraflops of data processing, and high energy efficiency of 15W to 40W.

The ministry expects that the new semiconductor will raise energy efficiency of various AI services, such as cloud data centers, by more than tenfold.

Visual Intelligence AI semiconductors for mobile and IoT devices are capable of visual recognition like the human eye. They can be used in smart CCTV cameras and drones.

The research team succeeded in developing a miniature-sized chip that endows various mobile and IoT devices with the level of visual intelligence similar to the human eye by implementing a highly efficient design and software technology that ensure precision and energy efficiency.

The chip, smaller than a fingertip (5mm x 5mm), minimizes circuit space, while maintaining performance of visual recognition 30 times every second by using one-tenth of the energy (0.5W) spent on commercial semiconductors, the ministry said.