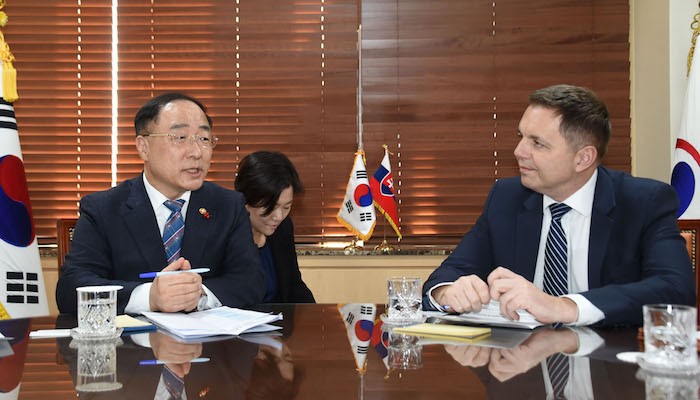 Hong Nam-ki, the minister of economy and finance, meets with his Slovak counterpart Peter Kazimir in Seoul. (image: Ministry of Economy and Finance)

Peter Kazimir made the comments in a meeting with his South Korean counterpart Hong Nam-ki at the government complex building in central Seoul, calling Asia’s fourth-largest economy a very important country for Slovakia, according to the Ministry of Economy and Finance.

Hong asked Kazimir to provide support to South Korean firms operating in Slovakia as he expressed hope for deepening economic cooperation between the two partners.

“The two sides deeply share the view of expanding economic cooperation in various areas,” the ministry said of the meeting.

In 2018, South Korea exported US$2.7 billion worth of goods to Slovakia while importing goods worth $186 million from the central European country, according to the ministry.

Earlier this month, South Korea said it will increase the number of hydrogen fuel cell electric vehicles to about 80,000 units by 2022 as part of a broader effort to give a boost to the “hydrogen economy.”

South Korea views the hydrogen economy as a new growth engine for its economy, which has relied heavily on semiconductors for decades.