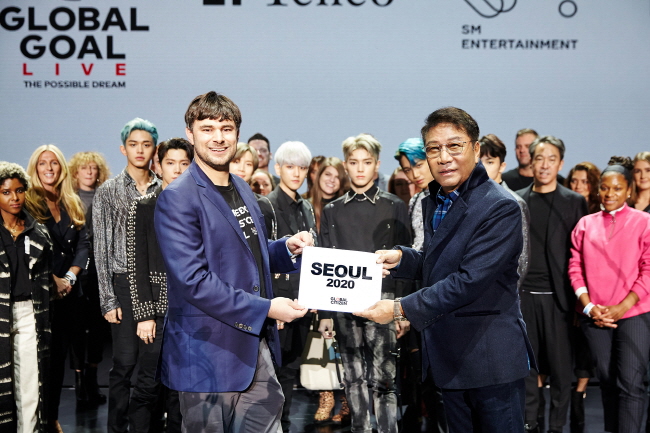 SM’s founder and chief producer Lee Soo-man and other SM officials secured the deal with Simon Moss, the co-founder of Global Citizen, in New York on Tuesday to host the 2020 “Global Goal Live: The Possible Dream” concert in Seoul on Sept. 26, according to SM.

Under the partnership, Lee will serve as the chief director of the Seoul leg of the Global Citizen concert, billed as the 21st-century “Live Aid” benefit concert.

With Seoul representing the Asian region, the concert will be held simultaneously in four other cities, including New York and Lagos, Nigeria, on four other continents — North and South America, Europe and Africa.

The five-continent concert will be streamed live worldwide for a consecutive 10-hour run.

The concert event is part of the charity efforts.

In partnership with United Nations member countries, philanthropists and private companies, Global Citizen has raised US$48.4 billion in charity funds over the past 10 years, and nearly 880 million people in extreme poverty have benefited from it, SM said.

“I will make efforts to make this event a meaningful concert where (people) jointly delve into the issues facing the world and put their charity into action,” Lee was quoted as saying.