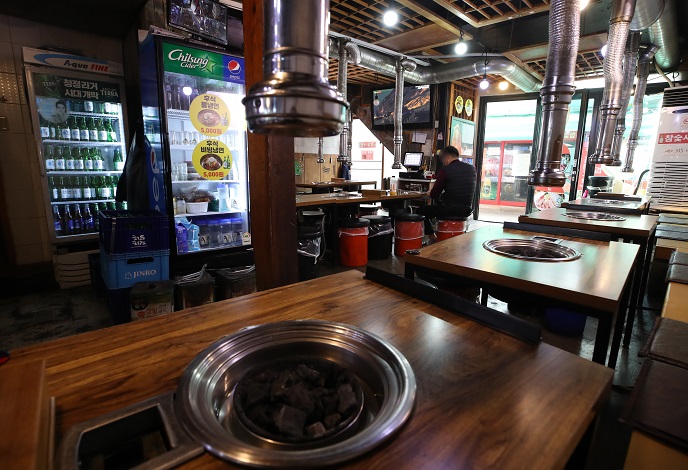 A barbecue restaurant in Seoul remains empty during lunch time on Dec. 16, 2021. (Yonhap)

SEOUL, Dec. 16 (Korea Bizwire) — Owners of restaurants, cafes and other small businesses across the country vented outrage on Thursday after the government announced it will restore tough social distancing measures following a spike in coronavirus cases and deaths.

Earlier in the day, the government said it will reduce the maximum private gathering size back to four people nationwide and restore a 9 p.m. curfew on restaurant and cafe business hours from Saturday to Jan. 2 to tackle the rapid surge of COVID-19 infections of late.

It promised to provide additional financial assistance to businesses on top of compensation for losses caused by the virus curbs.

After hearing the news, many owners of restaurants, cafes and other establishments expressed frustration.

“It feels as if only restaurants are being hassled over the curbs, considering that churches and factories where outbreaks are often reported aren’t even subject to the vaccine pass system,” a restaurant owner in Suwon, south of Seoul, said.

An owner of a barbecue restaurant in Ulsan, 415 kilometers southeast of Seoul, complained that a large number of group reservations have already been canceled amid expectations of stronger distancing restrictions.

“I’m worried that the remaining reservations could be canceled, too. Guests without reservations are also going to decrease too without a doubt,” the owner said.

An internet cafe owner in Gwangju, 330 kilometers south Seoul, said he saw many internet cafes close down over the past two years and added he was anxious over the potentially negative effect of the restrictions.

“I rather hope the government will enforce a powerful total shutdown of businesses for a short period of time to battle the pandemic then later allow us to operate as normal,” he said.

The travel industry was no exception either.

“The tourism sector is beyond disappointment and is in total despair due to the strengthened restrictions,” a travel industry worker on the southern island of Jeju said.