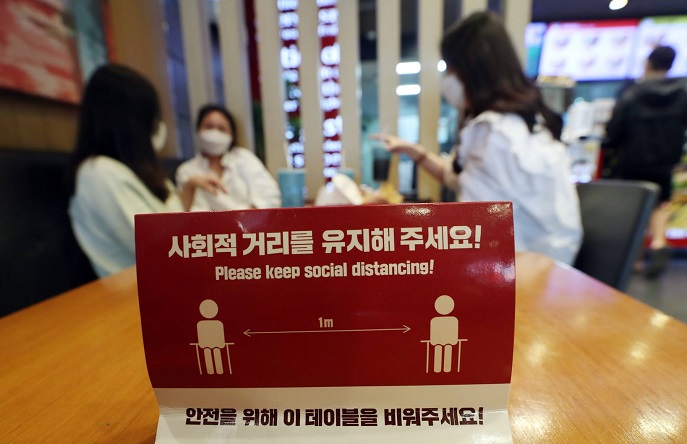 This photo from Yonhap News TV shows social distancing rule guidance and customers at a cafe in Seoul.

SEOUL, July 9 (Korea Bizwire) — The upcoming ban on private gatherings of three or more people in the greater Seoul area is driving owners of restaurants, bars, cafes and many other small businesses into utter despair.

On Friday, the government announced a decision to put the capital area under the toughest social distancing rules of Level 4, halving the maximum number of people allowed for private gatherings to a mere two.

Under the unprecedented restrictions set to be in effect for two weeks beginning Monday, gatherings of three or more are banned after 6 p.m. and a 10 p.m. curfew is imposed on facilities that are used by unspecified individuals.

Many small business owners reacted angrily to the toughest-ever social distancing rules, saying their livelihoods will now be threatened by the virtual shutdown.

Watching the announcement on television, a 70-year-old man surnamed Yoon, who runs a Korean-style sausage soup restaurant in the eastern Seoul ward of Gwangjin, said he fears the tougher restrictions may deal a fatal blow to many restaurants and other private businesses.

“I don’t know how to do business under the new rules,” Yoon sighed. “I have already suffered reductions in sales from group customers due to the current ban on gatherings of five or more. Now I’m not sure if I can survive the tougher restrictions.”

Yoon added that his employees have so far worked every other day to avoid dismissals but may face a far more uncertain fate starting next week.

Another self-employed man, who runs a small meat restaurant in the southern ward of Seocho, said he had anticipated a business recovery until recently but now feels suffocated by the tough social distancing measures.

“I’ve so far gotten into trouble with some customers asked to finish eating and leave before 10 p.m. If gatherings of three or more are banned after 6 p.m., I’m worried about whether customers who have come before that hour should be let out,” the man said. 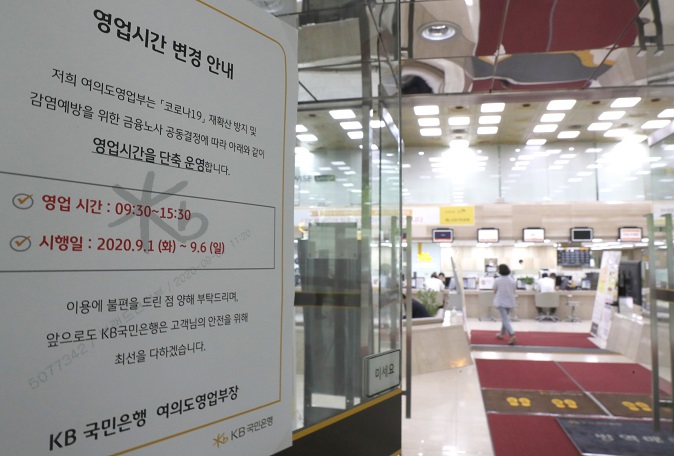 A notice informs people that business hours will be reduced by one hour at a bank in Seoul on July 9, 2021. (Yonhap)

The Korea Federation of Micro Enterprise issued a statement warning that the Level 4 scheme is expected to cause irreparable damage to small business owners and the self-employed.

But some business owners tried to see the situation from a different perspective, citing the recent surge in confirmed COVID-19 cases.

“These days, even customers are reluctant to dine in groups. The new rule that allows only two people to get together may be too harsh but seems inevitable due to the serious pandemic situation,” said an owner of a hangover soup restaurant in the southern ward of Gwanak.

A 31-year-old company employee, surnamed Lim, said she and her friends had planned to get together in the middle of this month but canceled the plan due to the new gathering ban.

Another company employee surnamed Kim said he will cancel all his prior appointments with friends as the latest social distancing rule implies that people must stay apart.

“It seems that the government may have sent out messages about the easing of social distancing rules to the public too hastily and that may have further aggravated the coronavirus situation,” Kim said.