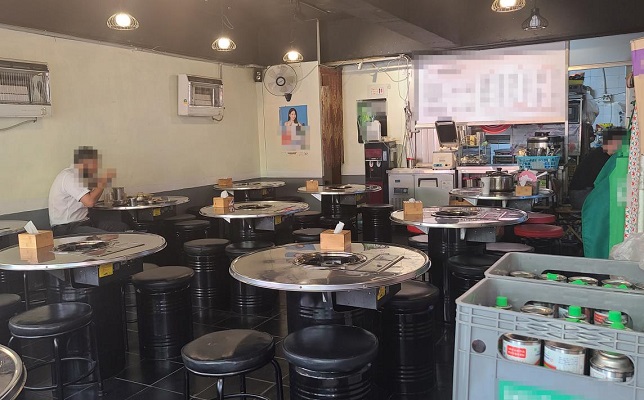 South Korea has reported nearly 1,300 new cases of COVID-19 in the past six days, forcing the country to raise the level of social distancing in Seoul and adjacent areas Sunday to stem further spread.

The food service sector saw some recovery in sales after the country relaxed social distancing measures in May amid a letup in virus cases.

But operators of small eateries and cafes are facing falling sales again, hit by the impact of the country’s longest-ever monsoon season and a flare-up in virus cases.

“During the rainy season, the number of customers declined. Sales at lunch reached less than 100,000 won (US$84.64) after the virus outbreak resurged,” said a 62-year-old eatery owner in Seoul’s college district of Shinchon.

“I may have to shut down the restaurant if college lectures are held online during the fall semester,” he said.

The latest spike in virus cases is mainly traced to a church in northern Seoul. But the country has continued to report sporadic cluster infections in places like restaurants, cafes and traditional markets.

South Korea added 297 more COVID-19 cases Wednesday, including 283 local infections, raising the total caseload to 16,058, according to the Korea Centers for Disease Control and Prevention (KCDC).

Alarmed by the resurgence in new daily virus cases, South Korea raised the level of social distancing in Seoul and the surrounding Gyeonggi Province by one notch to Level 2 in the three-tier system for two weeks from Sunday. 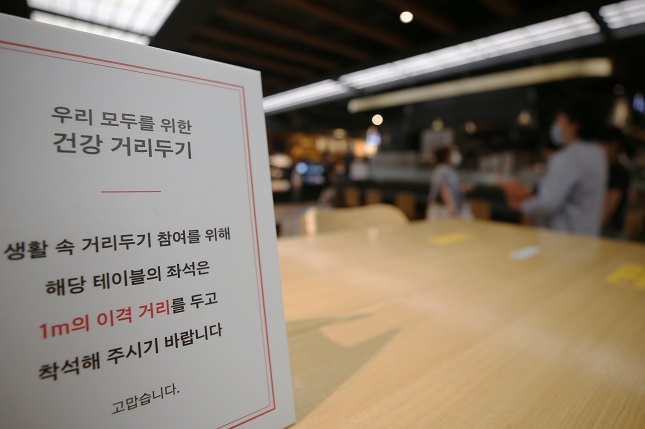 This file photo shows a signboard calling for social distancing at Shinsegae Department Store in the southwestern city of Gwangju. (Yonhap)

The scheme will allow South Koreans to maintain most of their daily routines, but outdoor gatherings of more than 100 people will be restricted. Sports events will be allowed without spectators. Indoor meetings of 50 or more people are restricted as well.

The so-called risk-prone facilities, including karaoke rooms, clubs, internet cafes, and buffet restaurants, have been ordered to shut down. The same goes for public facilities.

Local retailers also remained concerned that the latest recovery in their sales may be short-lived amid the virus resurgence.

The retail sector was hard hit by the first wave of the COVID-19 outbreak, as people refrained from visiting offline stores to avoid virus infections.

Industry leader Lotte Department Store and its two major rivals reported sharp falls in sales in the first quarter. Their revenue, however, began to recover in June, as virus outbreaks slowed down, aided by massive testing and contact tracing.

But the latest spike in virus cases and stricter social distancing may lead to another slump in revenue for retailers.

“During the latest holiday, the number of customers noticeably increased on the back of discount events. But we’re concerned about potential sales slumps, as the impact of the stricter social distancing will be felt starting this week,” said an official at a discount store chain.