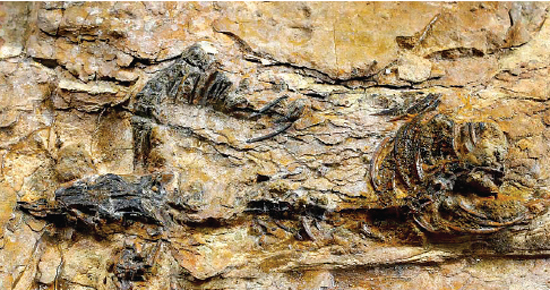 SEOUL, Nov. 26 (Korea Bizwire) — A casual angler found a complete skeleton of a small carnivorous dinosaur with the whole body length of less than 30 centimeters. On November 24, the dinosaur fossil was discovered in a Mesozoic geologic formation in Hadong, South Gyeongsang Province, 120 kilometers west of Busan.

It remains to be seen whether this is a new kind of dinosaur or remains of a young reptile. Even though there were several discoveries of carnivorous dinosaur bones including teeth, leg bones, and rib bones, this is the first time in which a full intact skeleton was found.

The skull’s length is 5.7 centimeters with the total length of the fossil reaching 28 centimeters. The state of preservation was excellent to the degree that the backbone connected from the skeleton was clearly visible.

The National Research Institute of Cultural Heritage confirmed that the fossil was remains of Theropods, or “beast-footed” dinosaurs, which are of the same family as the Tyrannosaurus. The layer in which the fossil was discovered is believed to belong to the Cretaceous period in the Mesozoic era, or 110 million to 120 million years ago.