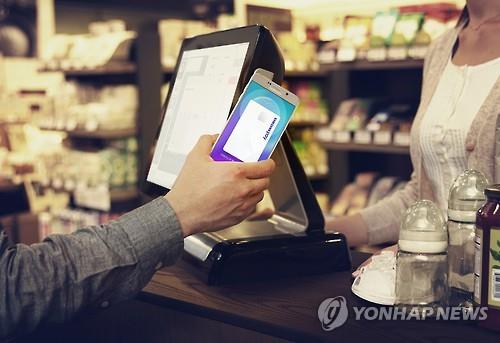 A user demonstrates how to use Samsung Pay in this file photo released by Samsung Electronics on Aug. 20, 2015. More than half of the smartphones sold wordwide will boast near field communication (NFC), a key technology in mobile payment, in 2016, a report showed on Sept. 15, which may cause Samsung to lose steam with its magnetic-backed tool. (Image : Yonhap)

SEOUL, Sept. 15 (Korea Bizwire) — More than half of the smartphones to be sold around the globe will boast near field communication (NFC), a key technology in mobile payment, in 2016, a report showed Tuesday, casting a cloud over Samsung Electronics Co.’s latest mobile payment tool, Samsung Pay.

The portion of NFC-equipped smartphones will reach 52.4 percent in 2016, compared to an estimated 39.8 percent this year, the data compiled by industry tracker Strategy Analytics showed.

Strategy Analytics added the portion of new models that support NFCtechnology will continue to increase over next few years to reach 71.8 percent in 2020.

But Samsung’s platform was considered significant as it also came with magnetic secure transmission (MST) technology, which does not call for separate payment devices at shops unlike its NFC counterparts, and also works on traditional credit card devices.