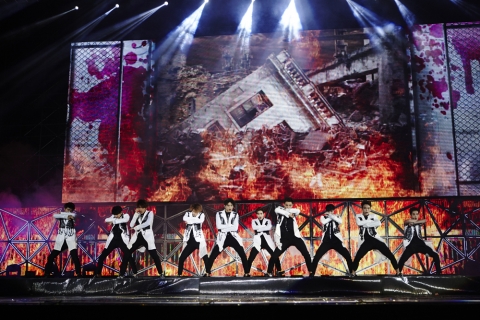 At the world-class concert, all of the SM Town artists – Kangta, BoA, TVXQ, Super Junior, Girls‘ Generation, SHINee, f(x), EXO, Red Velvet and so on – came together to collaborate and perform and painted the place colorfully with about 60 songs.

Furthermore, the artists sang an array of hit songs in Chinese and Korean languages, and as special performances, Max Changmin and Kyuhyun, as well as Zhou Mi and Victoria, showed each of their exceptional collaborations with the songs, “Ting Hai (Listen to the Sea)” and “Loving You,” respectively.

Reunited with popular first-generation idols – H.O.T’s Kangta, Shinhwa’s Shin Hye-sung, and actor-singer Lee Ji-hoon – in 11 years, the project band S performed with Kyuhyun and unveiled their latest track “Without You,” from their mini album “Autumn Breeze.”

Since the outset of the SM world tour in 2008, the world-class concert has passed a cumulative audience of 1 million, as touring around Seoul, New York, Paris, Tokyo, Beijing, Bangkok, and others, to grow to be as a global brand of performance.