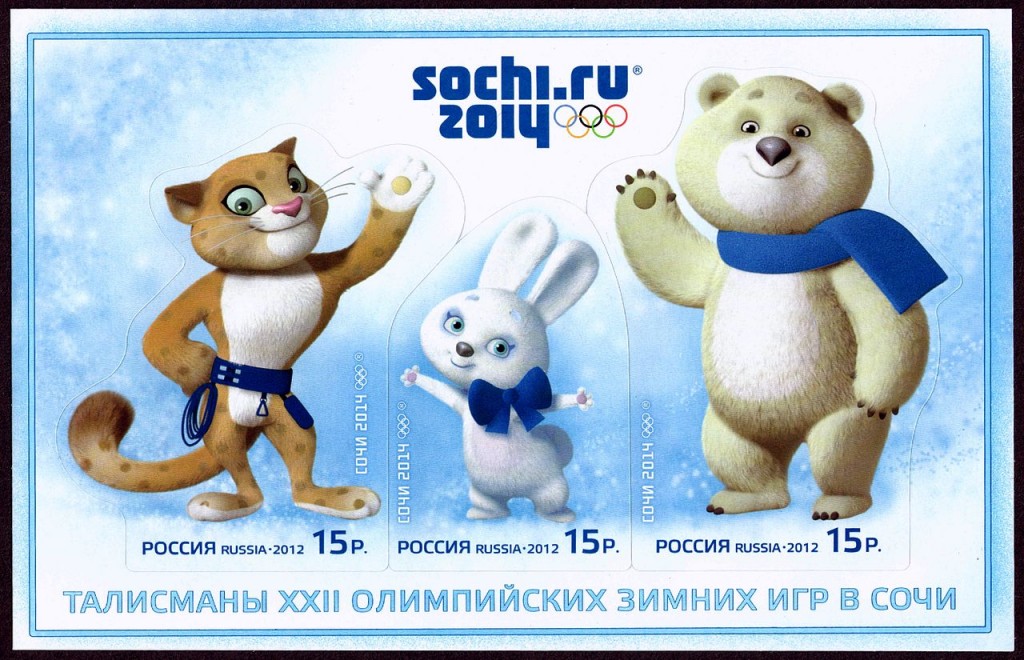 Sochi 2014 is also the first Olympic and Paralympic Games with a neutral carbon footprint associated with the travel of spectators and media attending the event. (image: Mascots of 2014 Sochi Winter Olympics (image: Wikimedia Commons)

SOCHI, Russia, Feb 04, 2014 (Korea Bizwire) – The Sochi 2014 Olympic Winter Games is the first Games in history to  mitigate the entire direct carbon footprint of its Organizing Committee  prior to the Opening Ceremony. Sochi 2014 officially announced today  that over 520,000 metric tons (MT) of CO2 equivalents have  already been mitigated through the “Sustainable Future” program,  implemented in Russia by Worldwide  Olympic Partner and Official  Carbon Partner of Sochi 2014, The  Dow Chemical Company (DOW).

Since March 2013, Dow has been working with its customers in Russia to  implement energy efficient and low-carbon technologies in the areas of  infrastructure, industry and agriculture within different regions of the  country. The greenhouse gas (GHG) emissions reductions delivered to date  by the groundbreaking  “Sustainable Future” program have been verified by 3rd  party international experts ERM,  who confirmed that results far exceeded the footprint of 360,000 MT of CO2  equivalents – the estimated direct carbon footprint of the Games. This  footprint includes emissions associated with the travel and  accommodation of athletes, staff, and volunteers, the operation of the  sports venues during Games time, and the Sochi 2014 Organizing  Committee’s activities from 2007 (when Russia received the right to host  the 2014 Olympic Winter Games) until the Paralympic Games’ Closing  Ceremony, on March 17, 2014.

Sochi 2014 is also the first  Olympic and Paralympic Games with a neutral carbon footprint associated  with the travel of spectators and media attending the event. This  footprint was estimated to be 160,000 MT of CO2 equivalents.  Dow worked with international experts Offsetters  to offset the travel footprint prior to the Opening Ceremony by retiring  carbon credits from a portfolio of high-quality projects developed to  international standards, and recognized under the International Carbon  Offset and Reduction Alliance (ICROA)  Code of Practice. Embracing the global spirit of the Olympics, this  portfolio includes projects from Russia, Brazil and South Korea – Host  Territories of the next three Olympic Games – in addition to a project  implemented by Dow at one of its manufacturing facilities in the United  States.

“It is with great pride and excitement that we announce today the  fulfillment of a key milestone on our commitment to deliver Games with  minimal impact on climate,” said Dmitry Chernyshenko, president and CEO  of the Sochi 2014 Organizing Committee. “The ‘Sustainable Future’  program went above and beyond our expectations, as it reached our  mitigation goals in such a short time. The program is also contributing  to promote technological advancements and delivering long lasting  benefits to the Russian economy.”

“Dow is a global leader in the chemical industry and a renowned  innovator, providing us with sustainable solutions to improve venues and  city infrastructure,” said Thomas Bach, president of the International  Olympic Committee (IOC). “As the Official Chemistry Company of the  Olympic Games, Dow will continue to play a significant role in  supporting the IOC’s long term vision for sustainability at the Olympic  Games.” 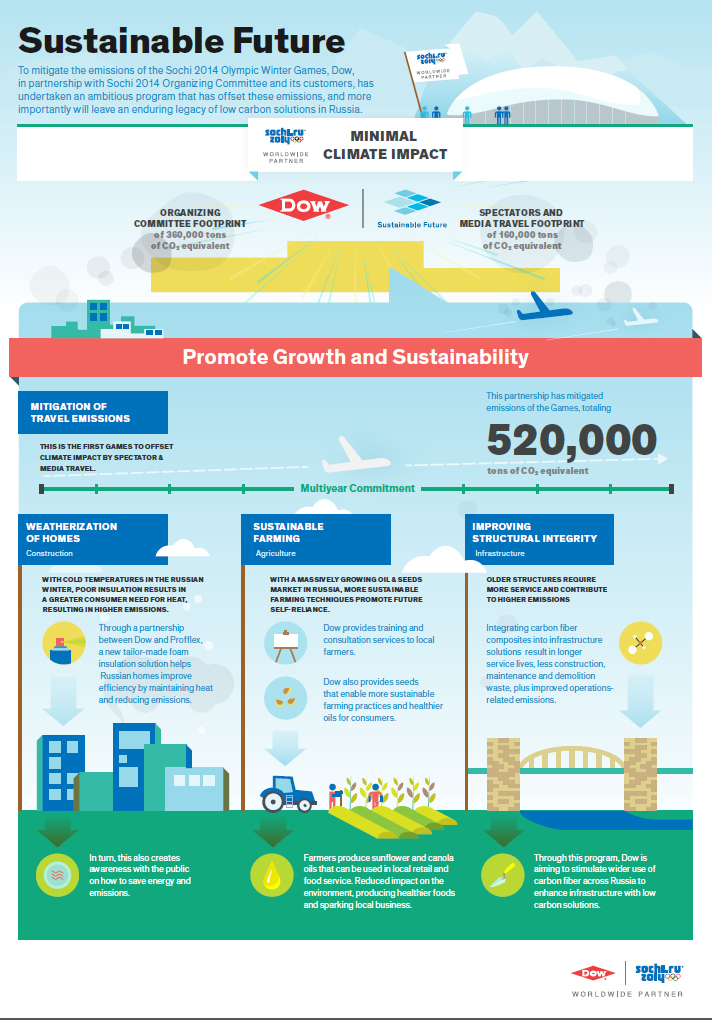 Selected by the Sochi 2014 Organizing Committee and the IOC to be the  Official Carbon Partner of this year’s Olympic Winter Games, Dow stepped  up to the challenge by working closely with the organizers, renowned  international experts and Russian companies to identify and assess  opportunities to deliver substantial greenhouse gas emissions reductions  and technology enhancements in key areas of the Russian economy.

After a thorough evaluation, Dow implemented the “Sustainable Future”  program with projects targeted at air  sealing solutions for buildings to enhance energy efficiency,  technologies to enhance energy efficiency of industrial processes, low-weight  and high-strength materials for structural integrity and durability of  civil infrastructure, and a holistic project to increase  crop yield and engage local producers on how to reduce emissions and  conserve energy in agricultural and farming practices.

In order to support this new approach to carbon mitigation enabled by  the “Sustainable Future” program, Dow partnered with Offsetters and  other international experts to develop an innovative GHG accounting  framework enabling economically viable projects to deliver climate  benefits for the footprint mitigation of a large-scale event. Dow’s Climate  Solutions Framework was launched at the United Nations’ COP 19/CMP 9  event in Warsaw, Poland, in November 2013, with broad recognition from  private and public sector players from around the world.

“The Worldwide Olympic Partnership allows Dow to showcase its solutions  on the world’s most revered global sports stage,” said George Hamilton,  vice president, Dow Olympic Operations. “As the Official Chemistry  Company of the Olympic Games, we evaluated what the needs are for the  Olympic Movement and the role Dow could play in helping to make the  Games better by our participation. Our capabilities and expertise make  us a key player to advance the 3rd pillar of the Olympism –  the environment – and this is how we have been working with Organizing  Committees and the IOC to deliver game-changing innovations for the  Olympic Games moving forward.”

Dow (DOW) combines the power of science and technology to  passionately innovate what is essential to human progress. The Company  is driving innovations that extract value from the intersection of  chemical, physical and biological sciences to help address many of the  world’s most challenging problems such as the need for clean water,  clean energy generation and conservation, and increasing agricultural  productivity. Dow’s integrated, market-driven, industry-leading  portfolio of specialty chemical, advanced materials, agrosciences and  plastics businesses delivers a broad range of technology-based products  and solutions to customers in approximately 180 countries and in high  growth sectors such as packaging, electronics, water, coatings and  agriculture. In 2013, Dow had annual sales of more than $57 billion and  employed approximately 53,000 people worldwide. The Company’s more than  6,000 products are manufactured at 201 sites in 36 countries across the  globe. References to “Dow” or the “Company” mean The Dow Chemical  Company and its consolidated subsidiaries unless otherwise expressly  noted. More information about Dow can be found at www.dow.com.