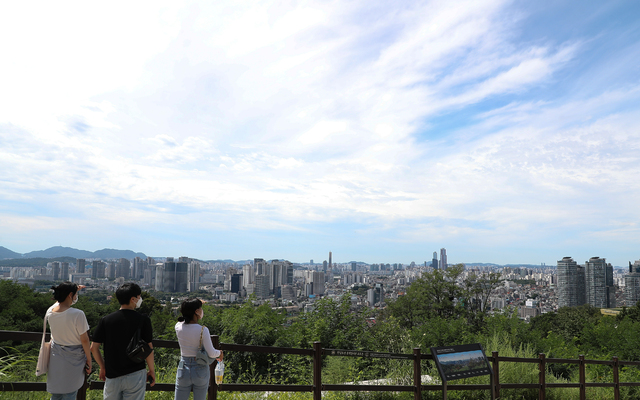 People look at the clear sky and buildings beneath it at Namsan Park in central Seoul on Sept. 5, 2021. (Yonhap)

SEOUL, April 22 (Korea Bizwire) — The density of carbon dioxide caused by human activities plunged in Seoul’s downtown areas due to the enforcement of social distancing to prevent the spread of COVID-19, a study showed Thursday.

The analysis showed that the growth in the density of carbon dioxide in Seoul’s downtown areas, which stood at 26.5 parts per million (ppm) before social distancing, fell by about 77 percent to 6.2 ppm during the social distancing period.

For two months starting from September last year, the CO2 density for the metropolitan region averaged 439 ppm. This figure was 22 ppm higher than the 417 ppm reported for Anmyeondo and 27 ppm higher than Mauna Loa, Hawaii during the same period.

By location, the CO2 density for urban forest areas such as Mount Nam and Mount Gwanak stood at 426 ppm and 428 ppm, respectively, lower than 452 ppm for Seoul’s central district of Yongsan, indicating that the degree of CO2 density was different by area even within the city.