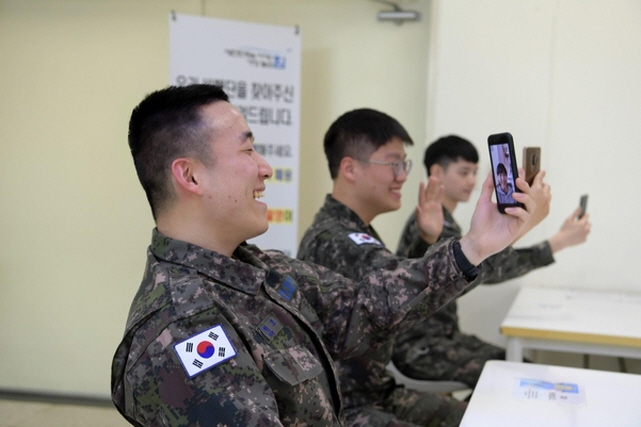 Air Force service members have video calls with their family members and friends at their barracks in Seongnam, south of Seoul, in this photo provided by the defense ministry on April 12, 2020.

SEOUL, April 13 (Korea Bizwire) — The defense ministry has temporarily allowed service personnel to have video calls with families and friends as part of efforts to help them reduce stress as they have been banned from leaving their bases or meeting visitors due to the coronavirus pandemic.

Soldiers have been banned from off-base traveling, vacationing and meeting with visitors since late February when South Korea began to witness a drastic surge in the number of the COVID-19 virus cases.

Starting last Wednesday, service members have been allowed to make video calls after work on weekdays or during weekends at designated places of each military barrack, the ministry said, adding the move has come along with measures to ensure security.

“Such a way of communication with their loved ones is one of diverse measures we’ve implemented to help our troops better overcome coronavirus blues, which is also expected to help the authorities better manage troops at a time when anti-virus steps have been implemented for a long time,” defense ministry spokesperson Choi Hyun-soo said.

The Navy has held sporting games and e-sport competitions more often than before among members of each base or naval ship and increased time for counseling services, according to officers.

The Air Force Education & Training Command made “a day of lunch boxes” every week, where the airmen are provided with a meal they order from outside, which aims to give them a moment of refreshment and to support local communities struggling with the fallout of the coronavirus.

“We will continue to come up with measures to guarantee service members’ good physical and mental health,” Choi added.

As of Monday, the number of the coronavirus cases in the military remained at 39, with the last confirmed case being reported March 25.

Of them, 38 have fully recovered, according to the defense ministry. As a preventive step, around 1,420 service members are being quarantined at their bases.

Nationwide, South Korea reported 25 more patients Monday, bringing the total number to 10,531, including 217 deaths, according to the Korea Centers for Disease Control and Prevention.