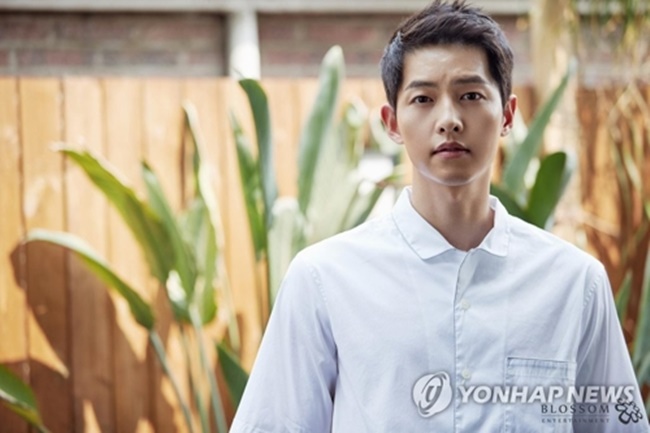 SEOUL, Dec. 14 (Korea Bizwire) – The “Descendants of the Sun” star Song Joong-ki has been chosen as the top television actor of the year in an annual poll released Thursday.

Gallup Korea canvassed 1,700 people aged 13 or over across the country from Nov. 8 to 28 and Song took the top spot, gaining 17.9 percent of the total votes.

His wife and co-star of the same drama, Song Hye-kyo, came in third with 9.5 percent support.

The two have not appeared in any television drama this year, one year after rising to the Asiawide stardom for their lead roles in the military romance series. But the couple made headlines for getting married in real life in October.

Those surveyed were asked to select the two TV actors they think have shined the most in 2016.

Actor Gong Yoo of the popular TV series “Guardian: The Lonely and Great God” came in second with a 10.1 percent.

Park Bo-gum, the star of the “Love In the Moonlight,” was fourth. He garnered 8.3 percent of the total votes. He had a strong presence although he did not do any TV show after “Love in the Moonlight” became a sensation last year.

He was followed by Lee Jong-suk with 7.0 percent and Bae Suzy with 4.3 percent, who both co-starred in “While You Were Sleeping,” while Kim Hee-sun of “Women of Dignity” was in seventh place.

Meanwhile, Gallop said there was no mega-hit Korean drama this year.

“In 2017, we had several dramas which were received well but no mega-hit series like ‘Descendants of the Sun,’ which was a smash hit in and out of the country last year, or ‘Guardian,’ which ended in January,” the company said. “The strikes at KBS and MBC in the second half of the year appear to be part of the reason.”