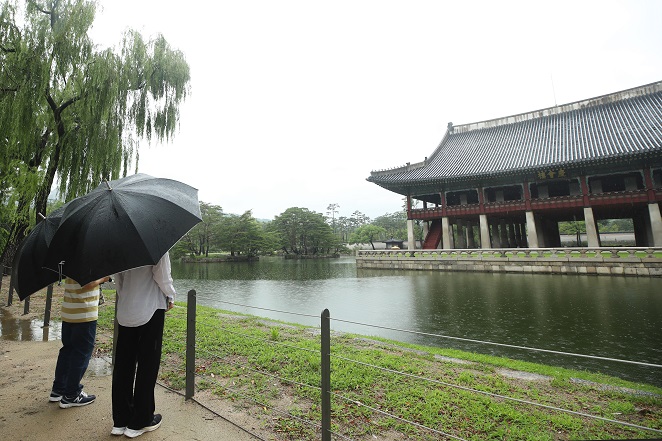 Visitors at Gyeongbok Palace in central Seoul observe the Gyeonghoeru Pavilion on July 22, 2020, which was opened to the public until Oct. 31. The pavilion, normally off-limits to the public, is considered the largest pavilion structure built during the Joseon Dynasty (1392-1910) and was used for royal banquets and special government functions, such as state occasions to welcome foreign envoys. (Yonhap)

SEOUL, July 22 (Korea Bizwire) – Many public libraries, museums and art galleries in South Korea reopened their doors to the public on Wednesday amid signs of a slowdown in COVID-19 infections.

The National Museum of Korea (NMK), the National Library of Korea and other cultural venues under the central government began accepting visitors, albeit with safety measures such as an electronic visitor registration system and limits on the number of visitors.

NMK is operating the exhibit under a reservation system in order to prevent the spread of the new coronavirus. Up to 200 people will be permitted to enjoy the exhibition in two-hour viewing sessions.

According to the museums, all viewing sessions on reopening day were full, with online reservations for upcoming session also filling up fast.

National heritage venues run by CHA, including palaces, royal tombs and museums, also began accepting visitors. These include the National Palace Museum of Korea and Gyeongbok, Changdeok and Deoksu palaces in Seoul.

The Gyeongbok Palace in central Seoul opened to the public its marquee Gyeonghoeru Pavilion, which was used for royal banquets and special government functions, such as state occasions to welcome foreign envoys, during the Joseon Dynasty (1392-1910). 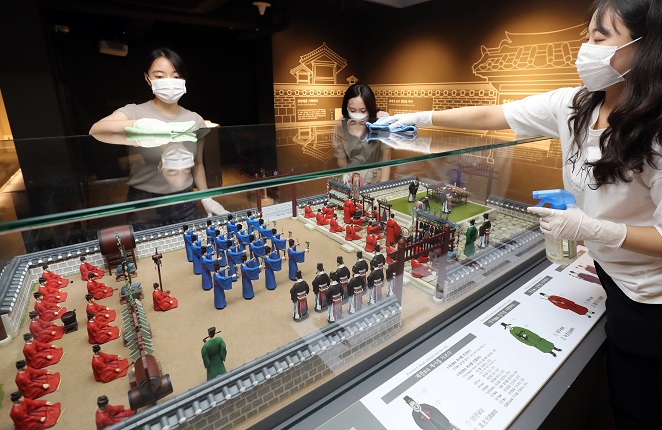 This file photo shows staffers at Seonjam Museum in central Seoul cleaning an exhibit piece with disinfectants on July 20, 2020, two days ahead of the reopening of national cultural facilities in the metropolitan area that have been shut down for months due to the coronavirus, including museums, art centers and libraries. (Yonhap)

The “pavilion of joyous meeting” has normally been off-limits and is considered the largest pavilion structure built during the Joseon Dynasty (1392-1910).

King Taejo, founder of the Joseon Dynasty, had the pavilion erected in 1395, and it was reconstructed in 1867. The pavilion will be open to the public until Oct. 31.

Indoor venues run by CHA will not accept group tours and will control the movement of visitors along designated routes. Visitors will be required to undergo mandatory temperature checks.

The National Museum of Modern and Contemporary Art (MMCA) also started accepting visitors in a limited fashion at its three venues — two in Seoul and one in Gwacheon, Gyeonggi Province.

“We will do our best to ensure safe exhibitions until COVID-19 is eradicated,” Youn told arriving visitors.

The Seoul metropolitan government also announced that it started accepting visitors to its 66 local libraries and museums.

Museums will accept visitors through an online reservation system, while the Seoul Metropolitan Library will only allow book rentals. The library will not allow visitors to stay for reading or studying.

“We hope the citizens can find some pleasure in their daily lives by visiting our cultural facilities,” Yoo Yeon-sik, the cultural division chief at the Seoul city government, said.