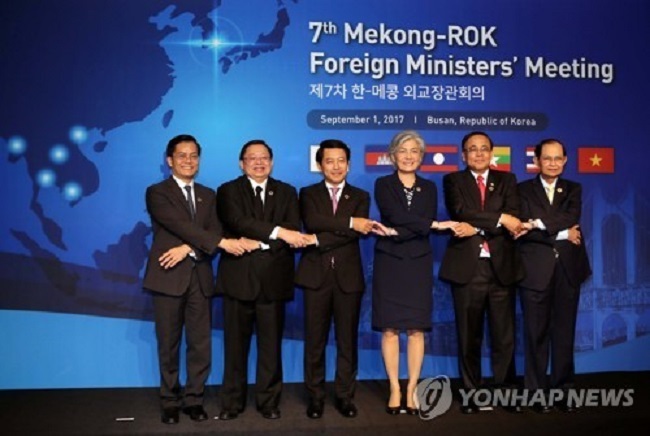 The conference was attended by the top diplomats of South Korea, Myanmar, Laos, Thailand, Cambodia and Vietnam, members of the 10-nation Association of Southeast Asian Nations (ASEAN). (Image: Yonhap)

The 7th Mekong-Republic of Korea Foreign Ministers’ Meeting adopted a new action plan outlining the long-term vision and priority projects for their cooperation until 2020.

The conference was attended by the top diplomats of South Korea, Myanmar, Laos, Thailand, Cambodia and Vietnam, members of the 10-nation Association of Southeast Asian Nations (ASEAN).

”There is no doubt that the enhanced connectivity and rapid economic growth in this critical region of the Mekong will greatly expedite the realization of the ASEAN community. And I believe that it is in the interest of Korea as well since the advancement and prosperity of the ASEAN community will in turn promote both ASEAN-ROK and Mekong-ROK economic cooperation, benefiting people across the region,” Korean Foreign Minister Kang Kyung-wha said in her opening remarks of the meeting.

Kang and Laos Foreign Minister Saleumxay Kommasith co-chaired the forum which was launched in 2011 at the suggestion of South Korea.

“It is in this spirit that my government is fully committed to supporting the revival of the miracle of the Han River in the Mekong River and to reinventing the Mekong region into a new engine of growth not only for East Asia but also for the global economy,” she added.

The action plan, the second of its kind, laid out a three-point partnership vision — ASEAN connectivity, sustainable development and human-centered development, the Ministry of Foreign Affairs here said.

“The ministers reiterated grave concerns over the developments in the Korean Peninsula…. Noting that these developments seriously threaten peace and stability in the entire region and beyond, the ministers strongly urged the DPRK (Democratic People’s Republic of Korea) to fully and immediately comply with its obligations arising from all the relevant United Nations Security Council Resolutions, including resolution 2371 adopted on Aug. 5,” the statement said.

“The ministers reiterated support for the complete, verifiable, and irreversible denuclearization of the Korean Peninsula in a peaceful manner, called for the exercise of self-restraint, and underscored the importance of creating conditions conducive for dialogue to de-escalate tensions and the resumption of dialogue in order to create conditions conducive to peace and stability,” it added.

The statement also included the countries’ commitment to maintaining freedom of navigation in and over the South China Sea in accordance with international law.

“The latest Korea-Mekong foreign ministers’ meeting, which is part of the government’s efforts to upgrade South Korea-ASEAN relations, has been an opportunity to intensify practical cooperation with the Mekong River countries and diversify South Korea’s diplomatic horizon,” the ministry said.