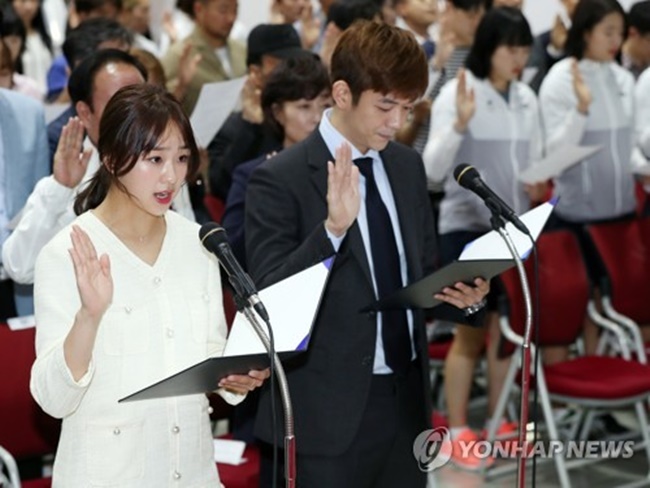 The Korean Sport & Olympic Committee (KSOC) held a launch ceremony for a team of athlete volunteers at the National Training Center in Seoul. (Image: Yonhap)

The Korean Sport & Olympic Committee (KSOC) held a launch ceremony for a team of athlete volunteers at the National Training Center in Seoul.

Among the athletes are Lee Yong-dae, the 2008 Olympic champion in badminton mixed doubles; Oh Eun-seok, a sabre fencer who won the men’s team gold at the 2012 Olympics; and Kim Woo-jin, a member of the gold medal-winning men’s archery team at the 2016 Summer Olympics.

Son Yeon-jae, a popular former rhythmic gymnast and two-time Olympian, will also be a volunteer. Son and Lee took the volunteer oath on behalf of the other athletes.

These athlete volunteers will work as stadium ushers and parking attendants, among other positions.

Lee Kee-heung, head of KSOC, said it was time for athletes to step up and join the efforts to ensure PyeongChang 2018′s success.

“There are plenty of volunteers to handle desk jobs, but there weren’t enough applications for outdoor positions,” Lee said. “And these athletes decided to take action. I’d like to thank them for volunteering.”

PyeongChang 2018, the first Winter Olympics to be held in South Korea, will take place from Feb. 9 to 25 next year.