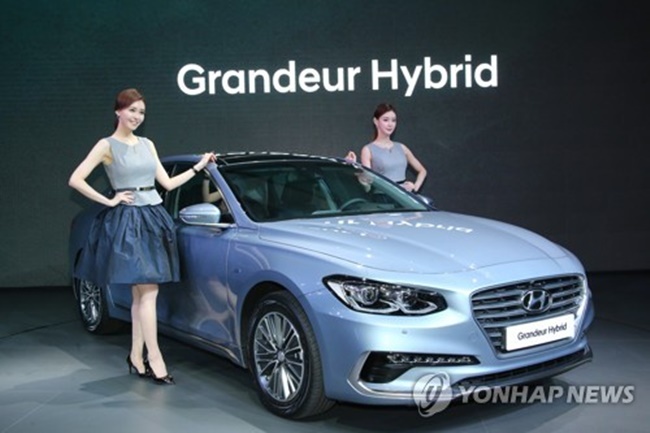 Data provided by carmakers showed sales of the Sonata, K5 and Malibu hit 2,268 units at the end of April, down a sharp 49.7 percent from a year earlier. (Image: Yonhap)

SEOUL, May 10 (Korea Bizwire) – Sales of midsize hybrid cars were halved in the first four months of this year, mainly due to existing vehicle models becoming dated and the popularity of new non-hybrid vehicles, market watchers said Sunday.

Data provided by carmakers showed sales of the Sonata, K5 and Malibu hit 2,268 units at the end of April, down a sharp 49.7 percent from a year earlier.

Broken down by month, sales in January plunged 62.6 percent on-year, with numbers backtracking 41.7 percent and 29.7 percent in the following two months, respectively, before rising to 56.6 percent in April.

Sales of the Sonata hybrid, which first reached the market in late 2014, and is made by Hyundai Motor Co., reached 1,281 units, while those for the K5 hybrid made by Kia Motors Corp. and sold as the Optima in the United States totaled 842, with Malibu hybrid numbers standing at 145. The Malibu is sold by GM Korea Co., the South Korean unit of U.S. auto giant General Motors.

On the other hand, sales of full-size hybrid cars rose for four straight months this year, with the Grandeur, made by Hyundai, topping the monthly 1,000 sales mark for April. The Grandeur is badged as the Azera in the North American market.

From January through April, full-size hybrid model sales reached 4,269, up a sharp 24.1 percent vis-a-vis the year before.

These fuel-efficient cars accounted for 29.9 percent of all full-size cars sold in the country.

Market watchers said the shift in the market reflects the popularity of the new Grandeur passenger car and that the hybrid models are no longer overly expensive compared with conventional gasoline powered cars that have less fuel economy.

“With the launch of the latest face-lifted Sonata hybrid pending, the size of the midsize sector is expected to remain weak for the time being,” an industry watcher said.

Hyundai, meanwhile, said a hybrid version based on the new Sonata “New Rise” will be launched within the year.