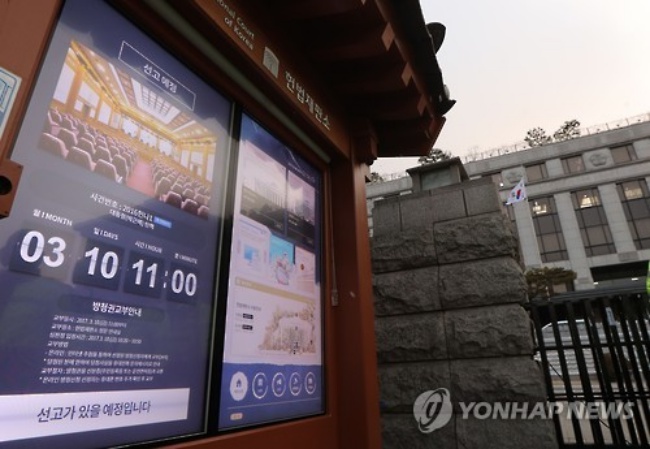 a screen in Seoul showing the date of the final verdict on President Park’s impeachment. (Image: Yonhap)

SEOUL, March 9 (Koreabiz Wire) – While the country awaits the Constitutional Court’s final verdict on the impeachment of President Park this Friday, some users on the South Korean web are raising somewhat bizarre yet interesting points as to how the numbers from one to ten symbolize every stage of the process of Park’s impeachment.

The impeachment bill was passed in the South Korean parliament back in December, when lawmakers overwhelmingly voted by a margin of 234-56 with 7 invalid votes cast and 1 lawmaker absent.

Since the date of the Supreme Court’s final verdict was announced to be March 8, and the impeachment vote was held on December 9, some users on the Internet jokingly laid out every one-digit number related to Park’s impeachment and realized it makes up every number from 1 to 10.

However, most disregarded the claim as little more than a trivial conspiracy theory.