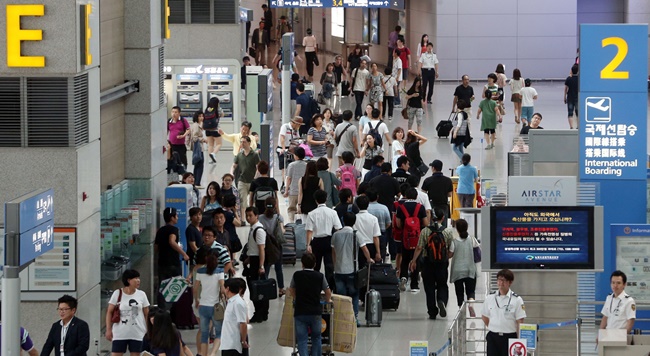 According to the data by Hana Tour, the country’s No. 1 travel agency, 320,000 people took overseas trips through its tours offered last month, up 13 percent from the previous year. (Image: Yonhap)

SEOUL, Sept. 1 (Korea Bizwire) – The number of South Koreans traveling to China continued to drop in August, with more people opting to fly to Japan or Southeast Asia instead, industry data showed Friday, as the ongoing diplomatic spat between Seoul and Beijing over the deployment of a U.S. missile defense system does not show signs of letting up.

According to the data by Hana Tour, the country’s No. 1 travel agency, 320,000 people took overseas trips through its tours offered last month, up 13 percent from the previous year.

Of the total, those who traveled to China plunged 36.7 percent compared with the same period last month, while outbound visitors to Japan and Southeast Asian countries surged 25.1 percent and 30.2 percent on-year, respectively.

The number of locals going to China via Hana Tour in July was also down a sharp 46.5 percent from the same period last year.

The South Korea-China relationship has been frayed in recent months over Seoul’s deployment of the Terminal High Altitude Area Defense (THAAD) battery on its soil. Beijing has taken a series of economic measures in an apparent sign of retaliation, including a ban on selling Korea-bound package tours since mid-March.