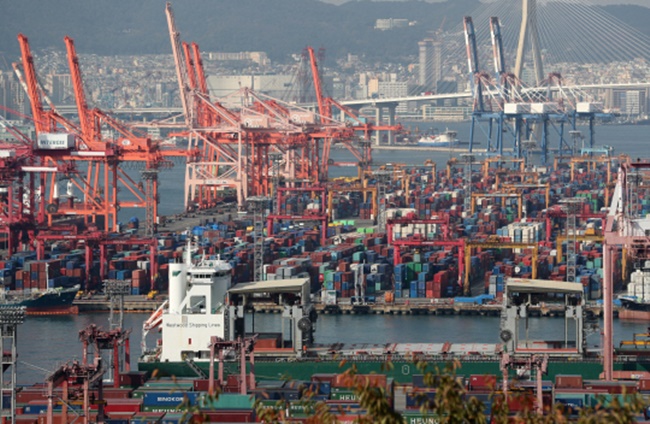 Outbound shipments came to US$45 billion for October, up from $41.9 billion tallied a year earlier, according to data compiled by the Ministry of Trade, Industry and Energy and the Korea Customs Service. (Image: Yonhap)

Outbound shipments came to US$45 billion for October, up from $41.9 billion tallied a year earlier, according to data compiled by the Ministry of Trade, Industry and Energy and the Korea Customs Service.

It marked the 12th consecutive month that exports have grown, despite shorter working days in October. South Korea’s exports have been on a steady rise since November 2016, led by an upturn in oil prices and recovering global trade.

The ministry attributed the hike in exports to a strong demand for semiconductors, vessels and petrochemical products as well as steel and displays.

The ministry said exports of South Korean-made vessels rose 36 percent in October from a year earlier while outbound shipments of petrochemicals increased 6.1 percent on-year due to a short supply in global markets.

By region, South Korea’s shipments to China, the largest export market, gained 13.5 percent last month on steady demand for semiconductors, computers and petrochemical products to mark 12 straight months of rise, while those to Vietnam jumped 33.8 percent, expanding for the 21th month in a row.

Meanwhile, shipments to the United States fell 12 percent on-year inOctober, the first drop in four months, on a decline in exports of cars and wireless communication equipment.

South Korea’s trade surplus with the world’s largest economy came to $1.31 billion in October, compared to $1.84 billion a year earlier.

The trade ministry said the upside trend will continue through the end of this year and reach $1 trillion won in trade value for the first time in three years.

“Despite the 10-day holiday, exports landed in positive terrain led by industries like semiconductors and petrochemicals,” said Deputy Trade Minister Kim Young-sam in a briefing. “On the back of brisk overseas sales, the country will achieve the 3-percent growth target for 2017.”

However, the country’s exports will receive limited impact from the improvement in Seoul-Beijing relations, which have recently been strained by the deployment of a U.S. missile defense system.

“Our exports to China have seen steady growth for nearly a year. The thawing relations will unlikely bring a dramatic turnaround of bilateral trade,” said Kim. “But Chinese demand for South Korean consumer goods is expected to increase to a large extent.”