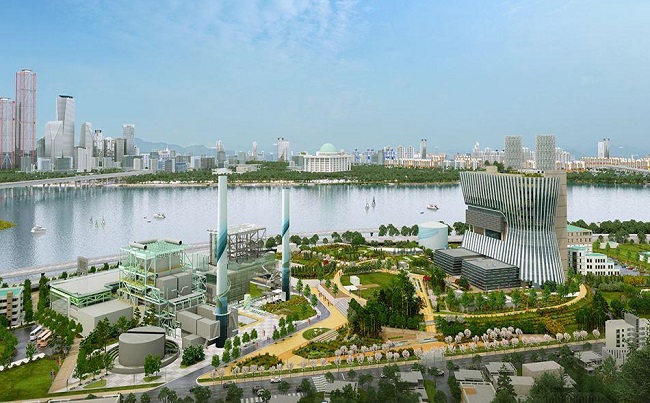 This photo provided by the Seoul’s Mapo Ward office shows a bird eye’s view of the new Seoul Power Plant.

Seoul Power Plant, operating since 1930, temporarily turned into an oil-fired power plant, before construction began for a new LNG plant in June 2013.

Construction wrapped up in November 2019 and the plant resumed operation. In April of this year, the plant’s outdoor park opened to the public.

The completion ceremony came two years after the construction was finished because of COVID-19, the Ministry of Trade, Industry, and Energy said.

Seoul Power Plant is the world’s first case for a large-scale power plant to go underground, with the old site used as a public park.

The new power plant uses LNG as a source of generating electricity which, unlike coal power plants, doesn’t release any sulfur oxide or dust. Emissions of nitrous oxides stand at 4 to 4.5 parts per million (ppm), which is merely one-fifths of the limit of 20 ppm.